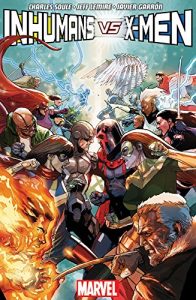 It was only a matter of time until the uneasy truce, reached following the death of Cyclops and the destruction of one of the two Terrigen clouds circling the globe, between mutants and Inhumans broke under the strain of the ongoing M-Pox crisis. While Beast desperately searches for a cure and a way for both species to live in mutual peace and harmony, individual feeling, suspicion and differing ideological and political perspectives feather the flames of mutual distrust, until spurred on and driven forward by a heart-rending discovery and the blind hatred of one of homo-superior’s long standing champions, the tie that loosely binds the non-aggression agreement snaps.  And in the pages of Inhumans vs. X-Men, the children of Kree genetics and those of the next stage in humanities evolution, reluctantly go to war with the survival of each of their races solely dependent on a decisive victory. As with most of histories conflicts, the journey to open hostility in Soule and Lemire’s story is complicated, driven by the fear of the unknown, an overwhelming desire to attempt to control the future and individual manipulation, but when the inevitable moment in which bloodshed becomes a certainty arrives, events rapidly spiral out of control and all hell breaks loose.

Clever, concise and saturated with action, vivid, detailed characterisation and a plot that keeps you rooted on the edge of your seat, Inhumans vs X-Men is as much a tragedy as it is a tale of heroes going to war. Like all stories of warring tribes, it ends in shocking misfortune for one and triumph, of a sort, for the other and its outcome will undoubtedly play a significant role in shaping the Marvel Universe for the foreseeable future. Questioning the motivations of those involved and highlighting the idea that, being essentially “human” and thus driven by emotion, people are easily led and coerced into all manner of unpleasant behaviours by the will of others and that as irrational as it is, revenge is a powerful motivational and controlling psychological factor, Inhumans vs X-Men is a powerful indictment of our flawed natures and a telling reflection of the current state of world affairs. And you know what they say about the best stories, don’t you? That’s right, they always mirror the reality and popular zeitgeist that helps create them. Which Inhumans vs X-Men does in near flawless fashion.  Brought to breath-taking life by a hideously talented team of artists, it’s a story whose imagery and underlying themes sear their way into your psyche, leaving you to dwell on and consider the ideas that this book offers, and presents, to its audience for what seems like an eternity after its closing moments have faded away. Fantastic… Tim Cundle