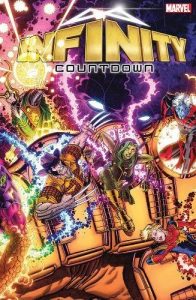 Six little stones. The entire fate of the Universe (the Marvel one that is) rests with a sextet of gems that when combined, have the power to shape and change reality. It isn’t just the one Universe whose fate depends on them either, it’s the whole multiverse as each and every parallel, mirror and separate Universe has its own set of Infinity Stones and as such, is subject to the whims and desires of whoever wields them.  Which is why, all the roads in space and time have led to the costumed crusaders and powered heroes rushing to try and find, protect and keep said stones out of the clutches of every villainous, opportunistic, single-minded, avaricious would-be tyrant, conqueror or ne-er do well in the cosmos.

Okay, so that’s a bit of a simplistic over view of the motivating forces driving the super types to do the right thing, and Gerry Duggan goes into far greater depth regarding the, often highly personal, reasons that the assembled (yes I went there and no, I don’t care what you think of my reasons for doing so) heroes standing firm in their quest for the stones are there to protect the Universe from the Infinity Stones.  And Infinity Countdown is where the journey to the end of everything begins. Because as everybody knows all too well, it’s always darkest before the dawn, and the potentially paradigm changing Infinity saga means that it’s going to get very, very dark and in Infinity Countdown, Gerry Duggan closes the curtains, blows out the candles, turns the light switch off and sets the Infinity wheels in motion.

Focusing on the Guardians of the Galaxy, fighting side by side with the Nova Corps, efforts to protect the Power Stone and a returning Adam Warlock’s attempt to find and claim the Soul Stone, Infinity Countdown doesn’t pull any punches as it’s galactic rollercoaster ride whips the stories protagonists through all sorts of emotional turmoil and a multitude of heart stopping, oh-goodness-we’re-all-about-to-die-horribly scenarios.  Duggan weaves nefarious bargains, the salvation of Groot, the return of Galactus, planet sized battles, family reunions and enforced separations and life death and rebirth into a tightly, tautly plotted tale that barely pauses for breath as it hurtles from one disaster strewn world to another as our dashing heroic types race to secure the Infinity Stones. Honestly, whoever dreamt the stones up may well be the bane every Marvel heroes day to day existence, but they can also rest assured that they created a fan pleasing Mcguffin that just keeps on giving.

Gerry Duggan is on splendid form throughout, writing up a character and plot driven storm and artistic collective responsible for bring his vision to life propel the insanely detailed story forward at a lighting pace. Actually, if I’ve got on teeny-tiny compliant it’s that the lack of a cohesive style, due to the number of artists working on the title, feels a little disconcerting at times, and even though the art is always incredible to behold, because it shifts around so much stylistically, it can, every now and then, slightly slow the flow of the story  . But as I said, it’s a minor gripe in an otherwise thoroughly enjoyable and excellent, rock ‘em, sock ‘em, good old fashioned superhero saga. Oh, and did I mention that Ultron, Hank Pym, Wolverine, Black Widow and the Silver Surfer are all thrown on to the galactic chessboard that is Infinity Countdown? I didn’t? Well, they do.  So there you go, that’s another reason you should read it. That and the fact that it’s not only an absolutely essential chapter in what’s about to happen in the Marvel Universe, but also one of the fastest, blink and you’ll miss it, packed to bursting books to have hit the shelves in I don’t know how long. The end is nigh… Tim Cundle