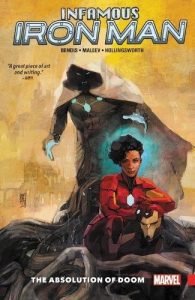 The greatest trick that the devil ever pulled was convincing Doom that he wasn’t alone. At least, it is in The Absolution of Doom. And Victor isn’t the only victim in the well-played and fastidiously executed long con that lies at the centre of his personal crises as Ben Grimm is also unwittingly dragged into it too. Having taken Stark’s place and unilaterally deciding, and declaring himself, to be Iron Man following a life changing epiphany, Doom continues, unswayed by public opinion, to fulfil his new role by taking down the super-villain community at large. But the harder he tries to assure himself and the world that he’s changed and is committed to atoning for his previous sins, the less the combined superhero commonality believes him, their mistrust of him having been built over the course of a lifetime of deception, transgression and evil.

Convinced that he’s indulging in some sort of private, nefarious agenda, both Riri Williams and Ben Grimm try to encourage him to abandon the mantle of Iron Man before his desire to repent tarnishes Tony Stark’s legacy forever. But Doom being Doom is set on his course, and rather than persuading him to give up, both are slowly, but surely (although not entirely), satisfied that his motivation, if nothing else, for doing what he’s doing, is pure. Even when the rug is pulled out from underneath him in grand fashion and his dearest wish is revealed to be a sham, he ends up fighting side by side with one of his oldest adversaries, putting the word before himself and inevitably helping to save the day from an eternity of darkness. Love him or loathe him, Doom really is Iron Man and in The Absolution of Doom proves himself to be every bit as good at being a hero as he was a villain.

It’s in stories like this, ones that gradually stitch their multitude threads together, that Brian Michael Bendis firmly illustrates his mastery of his chosen craft. Centred on the age old idea that the thing that you yearn for most is rarely what you think it’ll be and that reputations, while relatively easy to earn, are incredibly hard to shake, Infamous Iron Man also addresses, and answers, a question that’s been left dangling in the wind for far too long. That is, how did, and do, the half of the Fantastic Four left behind really feel about what happened to Reed and Sue Richards and why they don’t continue to carry the torch for that much missed heroic clique. The dialogue, characterisation and story-telling are, as you’d expect from Bendis, spot on and about as perfect as these things ever get in the four colour universe and Alex Maleev’s slightly washed out, noir infused and beautifully detailed artwork adds a sense of yearning, expectation and darkness to Victor’s long journey on the road to personal, and global, redemption. At the end of the day though, who doesn’t love Doom? There’s a reason he’s been around for more than half a century, and that’s because he’s the bad guy that everyone loved to hate. And now that he’s Iron Man, hopefully he’ll be around for another five decades. Long live Iron Man. Long Live Doom… Tim Cundle