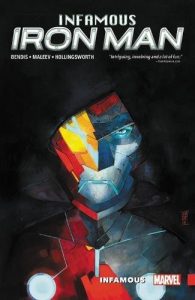 Having achieved his life-long ambition to become the most powerful being on Earth, then losing everything, being restored to his former self, rejecting his position as the sovereign of Latveria and somewhere in the middle of that, abandoning the title “Doctor”, Victor Von Doom discovers that he is strangely devoid of purpose, initiative and drive. Adrift in a world he had once, in another reality, ruled, he is, for once, unsure of what the future has in store for him. Until he sees Iron Man “die”* by the hand of Captain Marvel and in that moment, he knows the design that fate has for him. Witnessing Tony Stark breathe his last, Victor realises that he has walked the wrong path and that his goal in life is not to subjugate humanity to his will, but to save it from itself and from those who seek to harm it.  In that moment, he realises he has to become Iron Man, to continue Stark’s, and redesign his own, legacy and ultimately begin to seek redemption for the multiple wrongs he has inflicted upon the world. And Infamous Iron Man: Infamous is the story of how Victor Von Doom goes from being Earth’s premier super-villain to one of its most well-known heroes. Well, actually, it’s the opening chapter of that story, because he’s got a lot to atone for and an incredibly difficult journey ahead of him if he’s to convince S.H.I.E.L.D., the rest of the world and even himself that he’s finally seen the light and is now on the side of the righteous instead of that of the wicked and corrupt.

It’s no easy task being a hero as, much to his chagrin, Victor discovers in Infamous which throws him into conflict with Thing, S.H.I.E.L.D. (despite saving the life of its Director), sees him fighting the forces of evil and former comrades and allies, preventing his homeland descending even further into civil war and shatters one, and probably the most important, of his long held, core beliefs and motivational factors. But Victor has never failed at anything and the more adversity he faces in his new role as Iron Man, the more he strives to prove that he, and he alone, is the only one who can fill the gap left by Stark’s demise. Infamous is the darkly humorous, oddly endearing and strangely touching tale of a man ill equipped to be a hero trying to be something completely alien and foreign to his nature while striving to reinvent himself and find some sort of redemption in a world that has long since written him off as a lost cause and a danger to all life. Maleev’s precise, exact and slightly washed out artwork reflects the cold, machine like and logical nature of Infamous’ central character and Bendis’ consummate storytelling, focussed dialogue and meticulous and intricate characterisation that transforms a monster into a man perfectly captures everything that Doom is. Marvel’s newest Iron Man has started as it, hopefully, means to go on by blasting straight into the stratosphere in unstoppable and phenomenal style. And cue Victor in one of all too rare sing-along-with-Sabbath moments, “I am Iron Man, Victor Von Doom is Iron Man”…  Tim Cundle

*You know the rule. No-one, except Uncle Ben, really dies in the four colour universe. And Tony, just like Arnie, will be back.