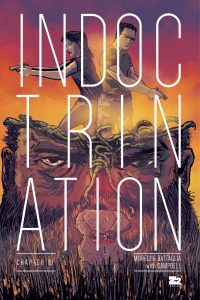 INDOCTRINATION begins in the dusty southwest with a string of murders that portend the sinister designs of an infamous terrorist to bring about the end times. Only the rogue actions of two FBI agents, who must rely on a potentially untrustworthy expatriate with deep ties to the terrorist, can stop the darkness. INDOCTRINATION follows these two FBI agents as they develop a complicated relationship with an infamous terrorist, in an attempt to solve a string of grizzly, seemingly related murders.

“We want readers on the edge of their seats because INDOCTRINATION is riveting, and because we are tapping into their very real collective fear about organizations like ISIS that dominate the darkest parts of our minds, and, frankly, the news day in and day out,” says Michael Moreci, a former journalist who recently signed a two-book deal with St. Martin’s Press. “Artist Matt Battaglia and I are equally fascinated by how ideas motivate extreme actions, but we approach the subject from two distinct points of view.”

“INDOCTRINATION hits that sweet spot where surreal creepiness and very real world horror dance around one another in way that convinces you that something ghastly is unfolding just underneath the skin of the comfortable world you know and love. First rate fear from Moreci and Battaglia!” –Cullen Bunn Writer, Harrow County, The Sixth Gun