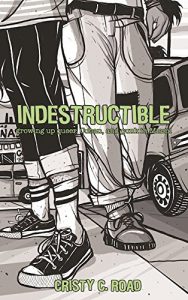 A frank and honest account of Road’s journey towards understanding her sexuality in the context of her Cuban roots, and the Miami punk scene in which she immersed herself.

Mixing text with some neat artwork that capture particular episodes in Cristy’s teenage years, Indestructible is a reminder of the painful years between childhood and adulthood when you are struggling to define yourself and your identity, in a maelstrom of hormones and sexual awakening.

Add in the Catholicism of Road’s Latina background, teenage misogyny and a peer group hostile to Punk, and you have some idea of the strength of will and character the author had to possess in order to make it through her teenage years; a challenge I’m sure many teens that walk a different path will be able to identify with.

The book also touches on some of the more self-destructive behaviours of teenagers such as alcohol and drug use and how they played a part in the author’s survival strategy.

Refreshingly candid, Indestructible is a worthwhile read for teenagers who are struggling with their journey in to adulthood, particularly gay teens, and for adults who have forgotten how difficult the teenage years are.   Ian Pickens