Warning: preg_match() expects parameter 2 to be string, object given in /var/www/vip4/sites/vip6102689/httpd/htdocs/wp-includes/formatting.php on line 4866
 Ignite – A War Against You (Century Media) - Mass Movement
x
Spread the love 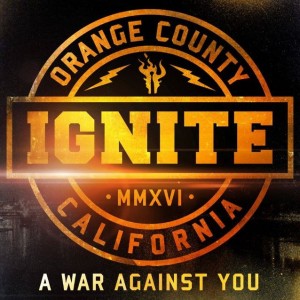 It’s no secret that I’m a massive Ignite fan, and have been for two decades; and I’ll probably be so until the day I’m sent, locked in a box, into the final, fiery furnace.  Why? Because even though they’re not exactly the most prolific of bands, every single one of their records adheres rigidly to an unswerving rule of three. That is, (1) Do the songs hit you in the chest in the freight train and make your spirit soar? (2) Do you instantly want to sing your heart out to, and with, each of tunes on the record? (3) Can it stand shoulder to shoulder with, and hold its head high in the company of, ‘Call On My Brothers’, one of the greatest HC records ever released? If the answer to those three simple questions is yes, then their work is done, and Ignite have triumphed again. And ‘A War Against You’ has passed with flying colours, sailing through the test with ease. Zoli’s soaring vocals ride an incredible crescendo of hard hitting, jaw dropping riffs which are nailed down and held firmly in place by the rock solid rhythm section led by Brett Rasmussen. Ignite are back, and damn, I couldn’t be happier. Incredible… Tim Mass Movement