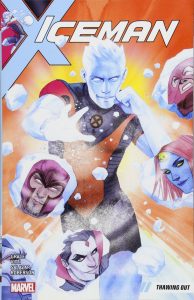 Ahhhh Bobby Drake. Truly one of the OG’s. A founding member of the X- Men, a Champion, a Defender and one of Spiderman’s Amazing Friends to name but a few of his many accomplishments. But what else do you really know about the Iceman?

Well I can tell you that he ain’t popular enough to sustain an ongoing series. Iceman got shitcanned as a regular monthly real quick and that’s a pity. Thawing Out gives Bobby the chance to shine on his own. He’s long been resigned to playing the X men’s resident wise-ass, peeling off the zingers in the midst of battle. The comic relief that laughs in the face of the unremittingly bleak circumstances that the muties always seem to find themselves in.

This series offers the most character growth we’ve seen from Bobby in a while. Whilst he’s not the first mutant to have struggled with his sexuality, he’s certainly the most visible. Because let’s be honest, outside of French Canada whoever really gave a fuck about Northstar?

Grace writes this first (and apparently only) arc as a brace of singular self-contained stories that are linked together by the undercurrent theme of Bobby struggling to come out to his parents. The mutant stigma is clearly an issue for Mr & Mrs Drake who are dyed in the wool conservatives and Drakes father in particular is evidently ashamed of his sons lack of ‘normality’. It was an interesting twist that Drake celebrates his mutation so boldly yet the issue of his sexuality causes him so much doubt and shame.

Despite it’s obvious desire to tackle social and cultural prejudice, this is still superhero book and as such there’s villains to be fought and days to be saved. Both of which Frosty handles in typically pithy and flamboyant style.

Seems like editorial couldn’t get a regular artist to hold this joint down and that’s a pity because despite the consistent and informed quality of Sina Grace’s writing, the mixed bag of art styles definitely hurts the cohesion.

Overall a solid book and a shame it’s been cancelled because there was definite potential for something special here. Nathan Bean