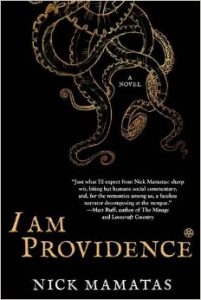 For those that read Lovecraftian fiction, myself included, it’s always about what is out there, just beyond what can be seen and the mystery of discovering if the underlying theme of the story is a human one, or lies somewhere, and with something, else. And let us not forget the alluring possibility that it is due to some “otherness” with which madness walks hand in hand, which is often more than just a secondary delight for many Lovecraft fans.

In I Am Providence we are introduced to Panos Panossian and Colleen Danzig both of whom are authors of Lovecraftian fiction. Attending a convention for writers, things take a rather dark turn as Panossian is murdered and his face removed. Colleen becomes the prime suspect as she turns up at the wrong time while trying to figure out who is responsible for his death.

Two narratives run through the book, and it’s in Colleen’s third person perspective where a lot of the problems that I have with I Am Providence lie. While mostly fun and offering a glimpse of Mamatas’ view on fandom, it tends to lose the mystery of the story and instead replaces it with humor that sometimes falls flat. The other narrative is from Panossian’s first person perspective and that is where the story really begins to live.

I Am Providence is both a love letter to the culture it is set in and also a note to those who take it too seriously to maybe ease up a little and relax. While it was a fun read, it wasn’t without its problems, some of which kept rearing their ugly heads throughout the story. The pacing was, for the most part, constant yet it did meander in places, which made it feel a little cumbersome. The final chapter though, is the source of my biggest bugbear as, so often happens, a lot occurs in the final pages and as such, it feels like there isn’t a thorough and final resolution. It’s kind of unforgivable, as it feels like Mamatas just got bored with the characters and wanted the book, and his take on badly written fiction from the thousands of writers that get semi famous for shoddy work, to be done. However, if you can get past the let down at the end, I Am Providence is mostly enjoyable and provides a unique insight into niche fandom while at the same time poking fun at it. Jason Bonton