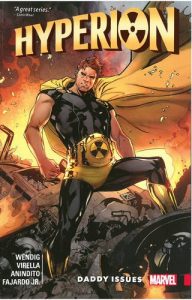 At some point in life, each and every of one of us is forced to confront a personal long night of the soul during which we question, examine and try to understand, who we really are. For Hyperion, the god like super being from an alternate Earth, that query takes the form of both a literal, and metaphysical, journey that in the wake of the Namor incident, he feels compelled to undertake in order to discover who he is, and learn more about the inhabitants of his new home. Abandoning his position in the Squadron Supreme, he assumes the identity of Marc, a truck driver and hits the road to try and find some answers to the riddles plaguing him. In the Marvel Universe though, nothing is ever that easy and before long his Kerouac fuelled, BJ McKay style pilgrimage is upended when he becomes entangled in the life of Doll, a young runaway. Fleeing from the monstrous destiny that awaits her as part of her “family’s” travelling carnival, she turns to Hyperion for help, forcing him to finally face who he is, as he unleashes his own brand of destructive, hyper- violent justice in an effort to save her and, ultimately, himself.

Chuck Wendig’s story of self-discovery, reflection and acceptance is one that everyone who has ever asked “Is this all I am? Is this all there is?” can immediately relate to. Dismissing the nature versus nature debate in favour of individuality and experience, Daddy Issues also explores the idea of parental responsibility, in that it examines the roles of offspring and progenitor and how they relate to each other in an intelligent and affectionate, yet also chilling and dangerous, character and relationship driven story that balances gratuitous and brutal action with its endearing plot. And the marvellously detailed and intricate artwork of Virella, Anindito and Laming adds weight, warmth and texture to Wendig’s tale of what it means to be human, which, at the end of day, is as much a state of mind as it is being.  Fantastic… Tim Cundle