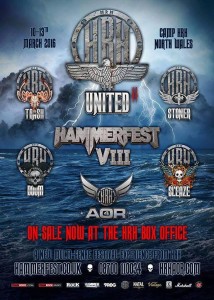 Never have I been to a holiday camp so much. Never have I returned to the same one so many times… and never would I of dreamt of how much fun I have every time I return to what has now been re-named ‘Camp HRH’.

The perfect amalgamation of metal and heavy rock all combined on one site, once again, with the imposing threat of whom I have to choose to view (as there is always more than one clash). Luckily the impeccable site layout makes it an easy task to flit for one stage to another at no great bother.

Catching the tail end of STEAK is a perfect way to ease oneself into what always becomes a behemoth of a weekend. With stragglers from last nights opening proceedings slowly shaking those dirty hangovers, the boys in STEAK produce some heavy slabs of weighty stoner rock. Playing to an impressive sized crowd and blasting through nearly forty-five minutes of weighty riffs is beneficial for most.

Next up, Sweden’s SORCERER make good use of the time slot they have. The quintet play top notch doom metal, not a million miles away from Candlemass, but are certainly no plagiarists. Dressed to look the part, and making every ounce of crowd participation count, it’s a wonder why these guys are not playing the main Hammerfest stage? With a tremendous sound to boot also SORCERER are onto a real winner. 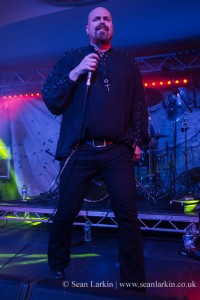 Now it was supposed to be UK Apple Core kings ACID REIGN up next, but sadly due to a nasty motorway accident, the late ETA of their arrival saw the bands slot cancelled (but come on guys… why would you choose to leave London on the day of such an important gig? That drive to North Wales is a lot further than most expect). This seemed to see a lot of ACID REIGN T Shirts floating around aimlessly.

RUSS BALLARD played himself through a strong plethora of well know tunes, to a sizable audience of mature rockers, in the AOR Arena. Crafting his professionalism over songs older and new, and surrounding himself with established musicians saw a solid set of ‘recognisables’ that I found myself surprisingly knowing more than expected. RUSS BALLARD did not disappoint.

Across the other side FLESHGOD APOCALYPSE pummelled the Hammerfest Stage with an undeniably potent arrangement of orchestral, black, death, grind. Super fast and technically rich, this band took no prisoners. Suffering from a dodgy sound at the start, then locking in tightly saw the audience intensify as the hour-long performance bought the most brutal deliverance of all weekend. With a good portion of the songs coming from Nuclear Blast releases FLESHGOD APOCALYPSE ensured everyone present was going to embrace the carnage, or be completely steam-rolled over! 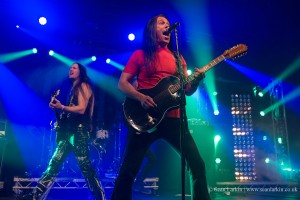 The rest of the evening was to be spent back at the AOR Arena, for a couple of bands, lots of pretty ladies, and some fine wines, completed with the soundtrack of 80’s rockers TYKETTO. Having seen the band several times over the last six years or so, and not being their first performance here at a HRH event, one could tell it was going to be a special experience. The rather proud Danny Vaughn seemed ecstatic to announce, “Tonight we will be playing the entirety of Don’t Come Easy; but… were are going to do it in reverse, otherwise you guys will all go home straight after Forever Young won’t ya?” with the audience erupting in appreciation, the packed in crowd lapped up every second of the New Yorkers melodies. TYKETTO could do no wrong here tonight and had the entire arena eating out of their sweaty palms – great tunes and full audience participation. 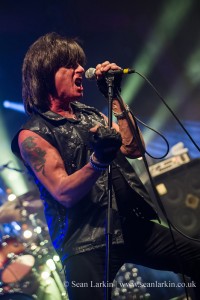 Was JOE LYNN TURNER able to follow that? Well, to be honest, anyone who had the slightest of doubts was in for a big surprise. The ex Rainbow/Deep Purple frontman charismatically rampaged the stage as if it was the 80s all over again. Turner sounded good. His voice is strong, and his presence felt, tonight he deserved the billing and claimed strong credibility. Banging out tunes that you would expect proved he was there to please, and embracing all aspects of his career JLT made a strong impact at HRH United 2016.

Having had to split the time between RECKLESS LOVE, who were gracing the Sleaze stage at the same time, was a tough call to make for me personally. But the party these Finns create was an infectious frivolity of abundant 80s hair metal, lapped up by loads and embraced by all present. The RECKLESS LOVE live experience is one not to be missed if you didn’t catch it all happening in the 80’s! 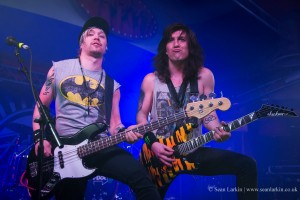 After a hearty start to the day at residential favourite The Barrel and Mash it was time to make way to the Hammerfest Arena for a band many had mentioned… OAF. Maybe I’m missing something, but this duo just didn’t float my boat. SAVAGE MESSIAH on the other hand seemed to have a weighty presence with their heads down, no messing approach. These guys have played a lot over the last couple of years, and the audience support was strong for this Earache Records band.

Next up Helsinki speed metal warriors RANGER played a ripper of a set, almost an hour of old school speed, mixed with trad-metal elements – fantastically refreshing and executed with precision musicianship, these guys along with EXODUS and TYKETTO played THE sets of the weekend. Needless to say I headed straight to the merch stall afterwards.

Rock trio MARVEL had caused quite a stir with their eclectic dress sense and approach to this whole live senario, they did play well, and it was nothing short of solid rock, but that was it, and take away the stage costumes…  would you really be compelled to keep watching?

DAN REED NETWORK had the biggest crowd of the weekend easily. Out came all the ladies, the 80s rockers, and anyone who remembered the stir this band caused almost 30 years ago! With a visual performance that would keep even the likes of dubious critics like myself, DAN REED still put on a high-class performance of extremely melodic rock.

Northern thrashers EVILE had a great sound, and an even greater response. Pulling out all the stops and eager to show off new axe-man Piers Donno-Fuller the quartet seemed eagar to draw strongly from latest release ‘Skull’. EVILE peak at their three-minute thrash barrages, its when the lengthier tunes kick in the pace and power start to slacken. It was then time to get in a quick four-song piece of QUIET RIOT. Now I am actually left with the question of was it really a good thing to do or not? Plagued by technical intro difficulties, and unfortunately lacking a sublime power the four songs I caught did not leave me with the impression I had expected. Disappointing is an understatement.

EXODUS on the other hand were not. Taking largely from the new beast that is ‘Blood In, Blood Out’ and mixing in a devilishly good selection of old school classics it was a set to be remembered. Zetro commanded his team of luminaries as if it were 1988 all over again, and so the dance floor was treated to the Toxic Waltz. This set was simply just not long enough, and the rabid crowd craved for more. EXODUS without Holt… who would of thought they would be this good?

LAWNMOWER DETH had an extremely tough act to follow. But by focusing on the songs and not so much in-between banter the Notts bunch played a belter of a set clawing back a fair sized crowd. Sure the goofing around was there, but it was more like a gig than the sometimes comedy stand up.