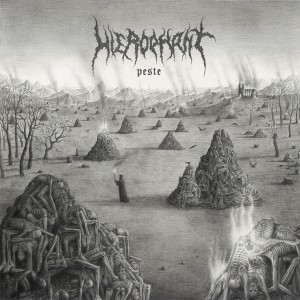 Hierophant – Peste (Bridge Nine)
There have been plenty of metal and hardcore records that touch on the darkside of mankind – the wars, the torture, the famine and diseases. Integrity for one wrote the blue print on the demon inside all of us. Italian Hierophant have re­-opened that box of Pandora and added some more fuel to the ever-­burning hatred. The titles of ‘Peste’ might be in Italian, but ‘Egoismo’, ‘Paranoia’, ‘Apatia’ or ‘Sadismo’ are self­-explanatory in most European languages. It’s all pure acid from the darkest and most sinister scientists of metal(core), and beats even the band’s previous effort ‘Great Mother; Holy Monster’ to the punch. Even the horrific cover speaks volumes. Martijn Welzen