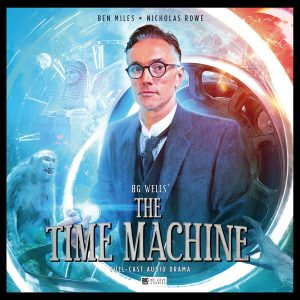 Victoriana! Time travel! Big ol’ bushy moustaches laden with wax! It’s HG Wells time again, and I’m going to hazard a guess that most of you are familiar with what is possibly Wells’ most famous novel; The Time Machine. In case you need a refresher, it’s the story of a scientist-come-gentleman inventor living in Victorian England, who has built a machine capable of carrying a person through time. The enigmatically titled Time Traveller (we never find out his name) tests his device with a journey that takes him to 802701 AD, and there he meets the Eloi, a society of peaceful, childlike adults living in a society in which strength and intellect are no longer advantageous to survival. He is later approached by a second race, the Morlocks; ape-like troglodytes who live underground and surface only at night. The Time Traveller assumes that the human race has evolved into these two distinctly separate species and that while the leisured classes have become the ineffectual Eloi, the downtrodden working classes have developed into the brutal Morlocks. Of course, this is not the case at all, because, as ever, THE TRUTH IS FAR MORE TERRIFYING!

Having listened to a few of Big Finish’s recent audio adaptions of the works of Wells, I’m going to stick my be-wattled neck out and say that The Time Machine represents their best adaptation of his work to date. Now, I’ll be honest- it’s one of my favourite novels by any author, and that could lead to some unconscious bias. But I always try to be objective when I listen to the stuff I’m sent to review, because I want to be honest with you lot. And though there may be danger of my head severing clean off my body if I try to stick my neck out any further, I’m going to qualify my ‘it’s the best adaption so far’ statement with this: Marc Platt, who revised this version from the original novel, has made the fewest changes from the source material. So it’s not some fly-by-night, postmodern reworking that makes no sense. It’s properly authentic.

But it’s not a slavish word-for-word narration either. The changes Platt has made only improve upon the source material, fleshing out characters, while leaving the story otherwise intact. So, the Time Traveller’s dinner guests, for example, now have names and personalities and are no longer little more than cyphers. Platt has also transformed the secondary narrator, who functioned in the novel as little more than a framing device, into a version of Wells himself. Oh, Marc Platt, you’re just so Goddamned meta. But in a good way.

Having the Time Traveller interact with a fictionalised Wells allows for some lovely commentary on the author, his works, and his world along the way. There’s some knowing humour too: I particularly enjoyed Platt’s cheeky riff on the creations of Wells’ contemporary Sir Arthur Conan Doyle, for example.

Ben Miles (Patrick from Steven Moffat Britcom ‘Coupling’) is superb as the Time Traveller, transitioning deftly between narration and wide-ranging character beats as the original nameless wanderer in time who (I believe) inspired a certain Sidney Newman to put pen to fag packet and invent a rogue time traveller of his own some 65 years later.  Nicholas Rowe excels too, in the far less showy, but equally important, role of Wells. He is, in turn, biography and biographer, and a layered but level-headed sounding board for this larger-than-life tale.

Great pace, great production, and perfect for those autumn evenings, I recommend this to anyone who enjoys HG Wells, science fiction, time travel or just a bloody good story. Oh, and before I forget:  I have to give a shout out to the sound designers for working out what a giant moth and colossal crabs at the end of time sound like. Well played. Bex Ferriday