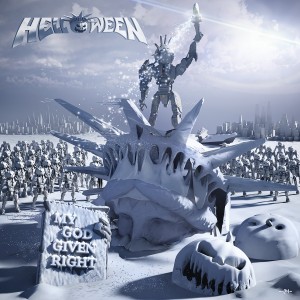 HELLOWEEN are one of the most influential and internationally successful acts of the global metal scene. With the release of their 14th studio album due on 1st June, the pumpkin heads are set to further cement their title as the founding fathers of German melodic speed metal.
The band’s first self-titled EP was released in 1985, making their new album My God-Given Right the celebratory marker for their impressive 30 year career.
The forthcoming album is now available for pre-order exclusively via Nuclear Blast.

The enchanting artwork was once again created by graphic guru Martin Häusler (BON JOVI, QUEEN, GOTTHARD) and will also be available as a 3D Lenticular print.

Martin Häusler comments his recent creation:
“We tried to built a world of ideas, keeping the “classical HELLOWEEN” elements, like the pumpkins on the one hand and a complete new look on the other, just like we did it the years before, working on a HELLOWEEN artwork. A first inspiration came from the album title My God-Given Right and some of the song titles like ‘Swing Of A Fallen World’, ‘Lost In America’, ‘Battle´s Won’ etc. During my research I stumbled upon the Blockbuster “Day After Tomorrow” and the idea of just leaving the world to the “pumpkins” was born. The most challenging part of this artwork was to have both, the Limited Edition and the 11″ Earbook provided with a 3D-Lenticular-cover (a full 3D cover, visible without 3D glasses). That’s the reason the entire artwork was done ‘in one piece’, using a 3D program…we did not want one of those ‘cheap Lenticular-covers, done by converting a 2d-version’, but the best possible real 3D result: So don’t get any other versions – this will be a true collector’s item!”

Frontman Andi Deris states:
”I never know how, but somehow we did it once again…the albums really rocks and kicks some major asses!!! We had the best folks with us to make this possible.
Producer Charlie Bauerfeind and Martin Häusler, who made a massive 3D artwork this time, WITHOUT stressing the whole color range 😉”

Adds guitarist Michael Weikath:
”… this proves what a bit of snow not only is able to, but really causes! I personally hate snow and the cover shows that too much of everything is never good. Just like Andi Deris, I’m very happy about the new album.”