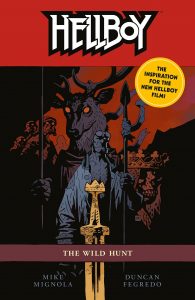 When word that Hellboy was being rebooted for the big screen reached me and I discovered that neither Guillermo Del Toro nor Ron Pearlman were involved, my mind started to drown in an adrenalin fuelled tsunami of emotions. Not knowing whether to sit in a corner and cry or whoop for joy, I was in turmoil. Then it was revealed that David Harbour was set to play Big Red and his celluloid destiny would be guided by Neil Marshall and I cursed myself for not trusting the one writer and artist in all of comicdom who has never let me down, Mike Mignola. I should have known that Mignola wouldn’t let the fate of his most famous son fall into the hands of philistines, purveyors of visual snake oil and flim-flam men. This realisation made my mood lift considerably as I started to look forward to the eventual release of said film with nervous expectation and joy. And then I discovered that said film is inspired by what I consider to be one of the greatest Hellboy stories to have emerged from the imagination of his creator, The Wild Hunt, and at that instant my heart started to beat double-time and fearing an imminent cardiac event, I attempted to slow my excited pulse by reading Hellboy’s adventures from the very beginning with a super-sized mug of espresso. Which was, of course,  a mistake as caffeine isn’t exactly known for its calming qualities and led to what, as I’m sure you can imagine, was a strange and slightly surreal experience.

Fast forward a couple of months, and a new edition of The Wild Hunt landed on my desk. Released to tie in with the forthcoming film and featuring a new introduction by Mike Mignola (which is both funny and touching) The Wild Hunt is a gorgeous monster. Mind you, it always was and truthfully I could have reviewed it without reading it again, because who doesn’t know their favourite books inside out? But temptation got the better of me, so I settled down for a couple of hours to once again let my mind explore every panel, page and word of the story of the oncoming war between the Witches and the forgotten peoples and natives of Britain and the chosen defender of the once venerated isle, Hellboy.  Combining Arthurian legend, folklore and mythology and the strange and mystical occult and magical canon that has gradually built itself around Hellboy, The Wild Hunt more than any other chapter in his life, paints an incredibly human picture of its hero as his origin story is explored further and he’s given the opportunity that every individual yearns for, the, albeit severely limited, right to choose who he is and wants to be. As fantastic and wonderful as Mignola’s story is, it’s Duncan Fegredo’s unique artistic vision that truly brings this tale of darkness, demons, the never dying, mystical creatures and prophecy to life and allows it to linger in your imagination and memory long after you’ve finished the final page. If you haven’t already read it, I implore you to correct that error of judgement post haste and spend an afternoon in the company of Hellboy and The Wild Hunt. You’ll be glad you did. Absolutely essential. Tim Cundle