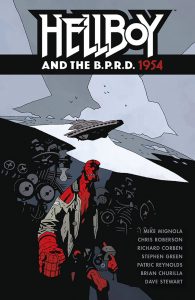 This is the third collection of Hellboy’s Cold War activities, following on (duh) from Hellboy & The BPRD 1952/53. No longer a rookie and with some experience under his belt, Big Red seems a lot more confident and like the character we’ve come to know over the past twenty years in the various mini-series and ongoing story arcs. Black Sun starts out feeling a lot like Carpenters the Thing with its isolated arctic setting, dwindling group of scientists and alleged alien threat. Needless to say things take a typically Mignolaian twist once our hero discovers a flying saucer wedged in the iceberg.

Despite the era neutral setting (Antarctica) Mignola subtly establishes a sense of time and place here with his use of vernacular. When Hellboy’s BPRD colleague on this mission, Woodrow Farrier, is referred to dismissively as a ‘coloured’ by some jackass intent on disregarding his scientific accomplishments, we are reminded just how backward attitudes were towards race back in the day. Having said that, I just saw that the current President of the United States Of America was circulating Britain First videos so for all intents and purposes this could be Hellboy & The BPRD 2017 after all.

Mutants, crackpot Nazi cults, the hollow earth all the gold you’ve come to expect is there. I’ve said it before and doubtless I’ll mutter it again but Mike’s work hits the sweet spot where so many of my interests collide so often it’s uncanny. The dude just knows what’s cool and we are lucky to have him.

In The Unreasoning Beast, the second story in this collection, Hellboy and his colleagues visit a suburban family plagued by a malevolent spectral monkey. Yes, that’s what I said. Needless to say there’s more to this twisted tale than a simple haunting and long term fans are treated to an easter egg in the final pages.

Mignola’s stories are beautifully illustrated by a selection of today’s finest artists. Richard Corben’s work in particular is always pleasing and it’s great to see him back in the Mignolaverse again.

Mignola’s tone and approach to his own universe is consistent and that is the strength of his writing. It does not matter whether Hellboy is saving the world from the iron grip of the Eternal Reich in the centre of the earth, exorcising ectoplasmic primates in the ‘burbs or hunting monsters in the shadows of Kowloon Walled City, it always FEELS like the same bloke is writing it. And more importantly that he’s having fun doing it. He never over-eggs the cake, keeping it simple enough for new readers to enjoy but dropping in enough tasty treats and ‘Ohhhhhh shit!’ moments for long term fans. Once again it’s a massive YES MATE from me. Nathan Bean