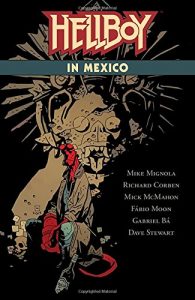 Heroes come in all shapes and sizes, but they don’t come much bigger than Mike Mignola’s most famous creation, the Red Right Hand of Doom, Hellboy. The one time “face” of the B.P.R.D., he’s the bright red, hell-born monster slaying machine who, when the things that go bump in the night strike, bumps back harder and makes them rethink their life and career choices. While he was a mainstay in the fight against evil for more than half a century, in nineteen fifty six he was sent to Mexico on assignment and shortly after arriving went missing for five months. Hellboy in Mexico is the story of what happened to him, and what he did, during those five months.  So strap yourselves in and get ready to head south of the border, because in these pages, things,  as they tend to do in Big Red’s world, turn every shade, and a few more in-between, of weird, wonderful and crazy.

From his arrival, and his joining a trio of vampire slaying Luchador brothers, through to getting married, fighting gods, being forced to wrestle Frankenstein’s monsters and hunting a Brujo* who becomes his nemesis, Hellboy’s missing time in Mexico, was far from peaceful. This is a blessing for the faithful, as we get a massive dose of the bizarre, strange and downright odd encounters that his life has been forever filled with.  As Mignola shares art duties with Mick McMahon, Fabio Moon, Gabriel Ba, Dave Stewart and the always incredible Richard Corben, the look of the stories varies stylistically, but it’s always sharp, detailed and unmistakably Hellboy. And the stories themselves, influenced as they are by Mexican mythology, luchador culture and the pulp monster stories and movies that are a staple of Mignola’s tales, are all rooted in fantastic and arcane and are wonderfully imaginative and joy to disappear into. Their creator’s unique, haunting and peculiarly mesmerizing, and often sparse, use of dialogue and gift for characterisation ensure that while they follow some of the traditional monster story tropes, they also chart their own unforgettable and exhilarating course. Viva la Mexico, viva la Hellboy! Tim Cundle

*Brujo – A Mexican Warlock or Wizard