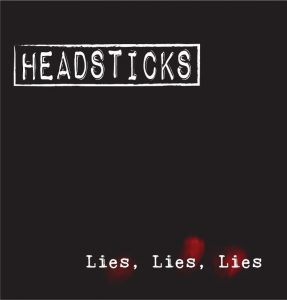 Not content with releasing a new live album, Headsticks are spoiling their fans by banging out a brand new 10″ record at the same time. Featuring 4 songs, this features something old, something new, something borrowed and something blue, all delivered on a tasty slab of coloured wax. The old comes in shape of a new version of their live favourite “You’re Killing Me America”, brought up to date with new samples from the chaos that is the U$A era 2017. New track “Soaps & Costume Dramas” is typical Headsticks – a folky anthem that brings to mind Blyth Power which means it comes highly recommended. “Big Game Hunter” is the borrowed on here, with Headsticks tackling the topic of trophy hunting, ably assisted by none other than Steve Ignorant on guest vocals. This reminds me of his old band Schwarzeneggar which was a great and maybe somewhat forgotten band. Rounding this disc off we have “Dying For A Lie” which can only be the something blue of this record – it’s a depressing tale of Tony Blair’s mission of destruction in taking us to war. There is a rock-a-billy touch to this tune and a fine example of Headsticks flexing their musical wings whilst staying true to their own original style. This EP comes with a nice package including lyrics, stickers and a download code, once again that attention to detail makes this a winner. Tom Chapman