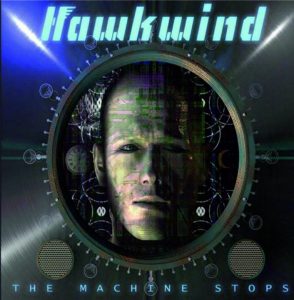 Based on E.M. Forsters dystopian Sci Fi novel,  Brock and Co. delivery a timely warning about the dangers of technology being used to manage every aspect of our lives and how it’s creating an increasingly insular and isolationist human race. Musically it’s classic Hawkwind, finely balanced between their traditional 70s Space Rock (‘A Solitary Man’ and ‘Living On Earth’), 80s Prog (‘Tube’) and 90s electronica (‘The Harmonic Hall’), the only downsides being the rather tedious ‘Hexagone’ and the slightly pointless ‘Yum Yum’. One of Hawkwind’s strongest albums for a long time, it bodes well for the live shows. Ian Pickens

With their last few releases, Hawkwind, have stepped up to deliver the goods; releasing some of their strongest material to date. Based on E.M. Forster’s Sci-fi classic ‘The Machine Stops’ is yet another Rizzla on their ever-expanding joint and mighty sweet it is too. The kings of space rock combine a plethora of psychedelic guitar groove which swirls with rhythms and atmospherics creating a vortex of sophisticated tune – mesmerising and addictive with its melancholic ambience. Where does a band turn to with such an extensive back catalogue? Well, to be honest do not expect anything new here, but be assured ‘The Machine Stops’ is refined and re-booted; a product of impressive notion, a band older, yes… but very much wiser. Nicely introduced by a spoken word ideology of how humans will eventually rely so much on technology – real food for thought, not tales of woe from a bunch of aging hippies. With artwork ingeniously illustrating the underlying concept carried throughout the fourteen stages of topic, this album sits firmly on the top of the list for must have releases by Hawkwind Mark Freebase