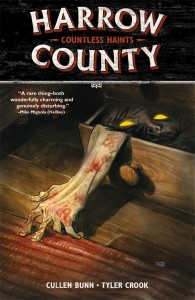 Emmy has grown up with a simple lifestyle, helping her father on his farm. As her eighteenth birthday approaches, odd things begin happening around the farm. The main one being for every animal born, a second one is born dead. Emmy also starts manifesting the ability to heal animals as well as being able to rapidly heal herself. When walking through the woods one day Emmy spots a boy who runs from her into a thorn thicket and as she catches up to him, all she finds of the boy is his skin which starts talking to her. The boy’s skinless body is is also the first to warn her of what her father and others are planning to do to her. With the information givin to her, Emmy decides to run and in turn encounters monsters from her past that have not forgotten about her. Some which are good. Some which are bad. Emmy though will never be the same again after the night she is about to experience.

Being a long time reader of horror and having an abiding love of horror films I’m usually more skeptical when it comes to horror in comics due to the fact that either the writing or the art is never really to par. To my surprise, and considerable enjoyment, though Harrow County passed this test with ease. Writer Cullen Bunn, who has written everything from superheroes to teenage mutated turtles, doesn’t try to cram too much in this first volume of the story of a witch relearning her powers and slowly finding out about her past. Readers can tell that Bunn is setting up a longer storyline where past events will come into play later, while making Emmy likeable even though she keeps some not so nice things around her for protection. Artist Tyler Crook the other half of this books equation, who has worked on B.P.R.D. and other supernatural tales for Dark Horse, changes his artwork up from his normal style. While his line art is the same for the most part, it’s the color in the book that truly brings it to life. Instead of going the usual comic way of computerized coloring (which is the norm now), all the art is watercolor which gives the book its own unique look and feel, giving it an aura of classical and high art almost instead of the same ole, same ole. Everything works just right in this first volume of Harrow County stories, making it a pleasure to read while ensuring that you desperately want to read more. Jason Bonton