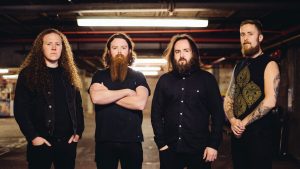 The heavy rockers have finished working on their sophomore full-length. HARK previously released a first teaser video for their forthcoming album