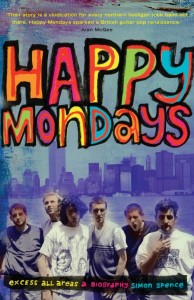 Happy Mondays – Excess All Areas – A Biography – Simon Spence (Aurum Press)
Well researched and enthusiastic biography of the Madchester Scallies tracing their origins from the surprisingly non-criminal suburbs of Manchester to become the band de jour of the Acid House scene in the late 80s/early 90s.

It’s probably the most honest portrayal of the band you will find – detailing the fist fights rehearsals often ended in, the genuinely astounding levels of drug use, the exaggerated criminal activities promulgated by Shaun Ryder, and the often chaotic yet inspiring live sets the band played, both with Factory Records compatriots New Order and their own headlining tours, including the infamous Glastonbury performance after which Michael Eavis said they would never play there again. The biography ends on the rather bleak breakup of the band amongst a sea of drugs, paranoia and mistrust and the corresponding dissolving of their label Factory Records in a mire of debt.

Author Spence has an established pedigree in writing about the Manchester scene including a biography of the Stone Roses (War and Peace) and being a staff writer for the NME, Q and the Guardian, so the level of writing is strong even though occasionally it wanders off topic a little (rather fitting for the Mondays – who often did the same thing while playing live); with direct quotes from all the main protagonists including the band themselves, management and key associates – Excess All Areas is full of Pills, Thrills and Bellyaches and an enjoyable memoir of one of the key UK bands of the 90s and the surprisingly singular and focused attitude that lay behind the apparent anarchy surrounding the band. Ian Pickens