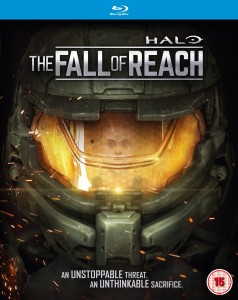 I remember playing the very first Halo game when it came out in 2001. While everyone was busy raving about the mutli-player aspect of the game, I was more interested in the game’s story, like I always am since I think multi-player is a cheap way to pad out a game (hello Call of Duty series). Who were these people and aliens and how did they get there? Yes, in the game you were dropped off as the faceless Master Chief. No other name was giving for your character though we were able to hear his voice. You also knew that this wasn’t his first contact with the hostile alien force. Multiple games later and more has been added to Master Chief’s story but his origin, his back-story, that was never discussed..

Well that changes with Halo:The Fall of Reach.

At the start we are introduced to Dr. Catherine Halsey who is looking for children with special DNA that makes them stronger and quicker than other children. The very first child we are introduced to is John (Master Chief), who is the first of 150 children she is searching for though only 75 are selected by her. Or to put it more accurately, kidnapped from their homes and preplaced with replicants that quickly die so where the parents would never know what has truly happened to their kids. Once all 75 are located on the planet Reach, they are told they will be the first to go through the Spartan program to help combat the rebellions that are spreading across the galaxy.

The first part is survival training and leadership which John quickly excels at. But it is the second part of the Spartan program that truly makes someone a Spartan. If they survive it, that is. The augmentation of body and mind. 37 percent of the children who are now teenagers die, and not all of the ones that survived the surgeries have full use of their bodies. John though, makes it through and becomes more of a leader as time moves on and more challenges are forced upon him.

Halo: The Fall of Reach is based on a book released the same year as the first game and lets fans of the game’s story see how everything really started. Not with a faceless super soldier, but with a six year old kid named John who went through the hell of becoming a super soldier no matter the cost.

The story in the movie does jump forward in time a lot and it does hurt it a little, especially if you don’t know what Halo is or at least some of the back story, as if it’s afraid to go into the truly harsh realities that faced the children growing up knowing that death is a part of their lives no matter what they do. The animation for the most part is nicely done, considering its CGI based. While it would be easy to nit-pick every scene, I’m not going to since I know that this movie is for the true Halo fans and they’ll enjoy it, just like I did. Soand let the movie be what it wanted to be, fan service for the fans of a series that has been going on for almost 15 years and will probably be around for another 15 at least. Jason Bonton