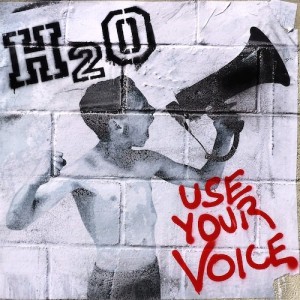 In advance of its October 9th release date, H2O have premiered the entirety of their new album Use Your Voice. The band sat down with Tim Timebomb (Rancid) on his show on Sirius XM last night to chat and play the album, and now they are excited to stream the album online here on Bandcamp. Additionally, if you missed the Sirius interview, it’ll re-air on Thursday, October 8th at 9pm PST / 12am EST and Sunday, October 11th at 9am PST / 12pm EST.

Use Your Voice is H2O‘s first proper full-length in seven years, since 2008’s critically-acclaimed Nothing To Prove. Recorded by Chad Gilbert (Producer, Nashville [who recorded vocals]) and Paul Miner (Engineer, Orange County, CA [who recorded music]), Use Your Voice is 11 songs of high-energy, high octane melodic hardcore punk that is sure to please any fan of the H2O’s impressive back catalog (which includes their 1996 self-titled debut, 1997’s Thicker Than Water [Epitaph], 1999’s F.T.T.W. [Epitaph], 2001’s Go [MCA], and landmark 2008 release Nothing To Prove [Bridge Nine]) and modern punk in all shapes and forms. On this new album, frontman and lyricist Toby Morse continues to deliver his direct and personal manifestos, with subjects spanning fatherhood (“Father Figure”), romantic relationships (“True Romance”), music fandom (“Popage”), social media philosophy (“#NotRealLife”) and more.

Following the release of Use Your Voice, H2O will embark on a 12-show European tour, followed by batch of U.S. tour dates in November and December, as well as a European jaunt in January on the Persistence Tour. And lastly, if you haven’t seen their music video for “Skate!”, featuring skateboarding legend Steve Caballero, do that here.

Order Use Your Voice on LP, CD, and digital formats now at B9Store.com, with iTunes, Amazon (LP // CD // MP3), and Bandcamp.