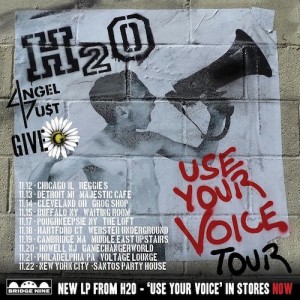 To support their first new studio album in seven years, H2O are gearing up for a two-part U.S. tour that starts this Thursday in Chicago! The first midwest/east coast leg of the tour runs November 12th through 22nd, while the second half runs December 3rd through 6th in the Southeast. Check out all tour dates listed below which feature support from Angel Du$t, GIVE, & others.

Released on October 9th, Use Your Voice is 11 songs of high-energy, high octane melodic hardcore punk that is sure to please any fan of the H2O‘s impressive back catalog (which includes their 1996 self-titled debut, 1997’s Thicker Than Water [Epitaph], 1999’s F.T.T.W. [Epitaph], 2001’s Go [MCA], and landmark 2008 release Nothing To Prove [Bridge Nine]) and modern punk in all shapes and forms. On this new album, frontman and lyricist Toby Morse continues to deliver his direct and personal manifestos, with subjects spanning fatherhood (“Father Figure”), romantic relationships (“True Romance”), music fandom (“Popage”), social media philosophy (“#NotRealLife”) and more.

Following November and December’s tour dates, H2O are booked for a European jaunt in January on the Persistence Tour. And lastly, if you haven’t seen their music video for “Skate!”, featuring skateboarding legend Steve Caballero, do that here.