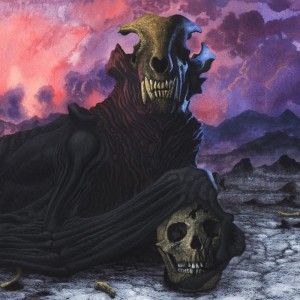 Cadabra Records, is preparing for the early February release of The Hound & The Music Of Erich Zann, two classic stories by celebrated author H.P. LOVECRAFT, marking the first time the author’s works have been read on vinyl in over thirty-five years.

As 2015 marks the 125th anniversary of the life of H.P. LOVECRAFT — the creative mastermind who helped attract countless souls into the realms of horror fiction for more than a century — Cadabra Records has begun its ongoing series paying homage to the author. The man remains a master of the weird tale, his influence has spanned through generations of film makers, musicians, artists, and authors alike. Whether you’ve already read his work or are new to LOVECRAFT, you will gasp in wonder to the horrors within. Dim the lights, close your eyes, and listen to some of the greatest tales of horror ever told.

In this maiden piece of the ominous collection, reader Andrew Leman brings to life stories The Hound and The Music Of Erich Zann. Leman is a partner of the H.P. LOVECRAFT historical society, a professional actor with years of stage, screen, and audio performances including The Call Of Cthulhu, The Whisperer In Darkness, and Dark Adventure Radio Theatre, his voice capturing the terror, dread, suspense and madness permeating LOVECRAFT’s writing. The liner notes for The Hound & The Music Of Erich Zann were written by S.T. Joshi, a leading scholar on the writer and the author of H. P. Lovecraft: The Decline Of The West, I Am Providence: The Life And Times Of H. P. Lovecraft, Lovecraft And An Age In Transition, and other critical and biographical works. The pristine auditory delivery of the ominous tales includes sound and effects handled by Teratoma Sound Lab, with its artwork handled by Alan Brown.

Specializing in the spoken arts — specifically, dark words in the vinyl format — Cadabra Records will release The Hound & The Music Of Erich Zann on February 5th, 2016. The first pressing will see a run of 500 copies on 150-gram vinyl and housed in a gatefold tip-on “old style” jacket, including an 8-page booklet with extensive liner notes and more.

Preorders will go live next Thursday, November 12th, with the first public audio sample of these newly restored works.

Also offered on the date of presale, an extremely limited run of 100 subscriptions in the Lovecraft In Black series. Here, these albums are individually numbered on exclusive colored vinyl with many extras to be announced. These subscriptions include: The Hound & The Music of Erich Zann LP, The Lurking Fear LP, Pickman’s Model and The Picture In The House LP, Hallowe’en In A Suburb & Others 7″ EP — a collection of seven poems exclusive to subscription, and more, as these titles see release through Cadabra over the coming months.