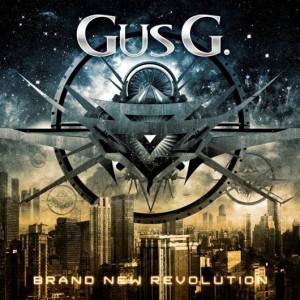 Gus G – Brand New Revolution CD (Century Media)
The Ozzy/Firewind guitar virtuoso’s sophomore release, and it’s a twelve track, six string sonic spectacular – but more importantly behind the impressive riffage and even more impressive solos are actual songs! One of my pet hates with the majority of fret board noodlers is the complete lack of thought that goes into the song writing, which often plays second fiddle to exhibiting the guitarist’s unarguable talents. Gus G avoids that pitfall by getting the only instrumental on ‘BNR’ out of the way right at the start (‘The Quest’), and proceeds to unleash some finely constructed tunes such as the grooveridden ‘Burn’ or the banging ‘Come Hell or High Water’. There’s the obligatory Power Ballad (the Scorpions/Schenker-esque ‘Behind Those Eyes)’ but as with the heavier tracks the G-Man keeps the quality amped up so the album doesn’t lose momentum; even the mixture of vocalists (Jeff Scott Soto, Elize Ryd – Amaranthe, Jacob Bunton – Adler/Lynam & Mats Levén – Candlemass/Yngwie Malmsteen) doesn’t break the flow of the songs. Ian Pickens