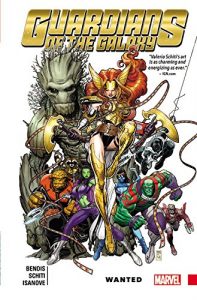 I’m sure that at some point in your life, probably when strolling through a book shop or comic book store, you’ve overheard people who don’t actually know what they’re talking about blithely dismiss the staples of genre fiction as though they’re so much detritus and unwanted flotsam. You know the ones I mean, those story ideas that are used time and time again until they become part of the firmament and keep popping up here there and everywhere, albeit in slightly different forms.  Well, there’s a reason writers keep using them and when you break it down and get stuck into the minutia of why they appear to be repeated ad infinitum, there’s a very simple reason for it. Because they work.  Now take a deep breath, hold it (trust you’re going to need to for the next part) and…In Wanted, Brian Michael Bendis uses an age old favourite plot device. The one in which a band of desperado’s take on impossible odds in order to do the right thing (The Magnificent Seven, The Seven Samurai , Armageddon, Battle Beyond the Stars, Star Wars need I go on?), beefs it up with the soldiers creed, “Leave no man behind”, pumps if full of excitement, energy, action, fantastic characterisation and number of sub-plots that explore the changing relationships that exist between the members of  the team and it’s altered dynamic following the whole Peter Quill Emperor of Spartax hoo-ha and before you can gasp in wonder at his latest display of literary wonder, you’ve been sucked in, chewed up and spat the other side with a huge grin plastered all over your face.  And, relax.

The team of ragged, tough as nails troops that Bendis throws into the fray are of course, the Guardians, and their seemingly impossible task is to take down a Badoon prison planet in order to free a former colleague and friend. Yeah, you read that right. A prison planet. A whole world. Figuring that their only chance of success lies in attack via small strike squads, each with its own objective, the Guardians put their plan into action and Wanted’s five issue arc follows each team on the mission before bringing them back together for a gung-ho, explosive finale in which they take the fight directly to the Badoon. This being a Guardians story, nothing goes exactly as it should, but that just adds extra layers to an already engrossing plot, as our heroes figure things out on the fly, and thanks to Valerio Schiti’s magic touch, each and every exquisitely detailed panel and page in this book looks every bit as good, if not even better, as it reads. It’s true you know, you really can’t the classics… Tim Cundle