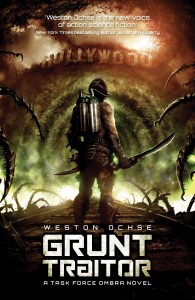 Their spies were among us for years. They mapped our electrical infrastructure, learned our weaknesses, until finally they flipped the switch and threw us back into the Dark Ages. Only OMBRA and its battalions around the world seem capable of defending Earth from the next wave of attack-terraforming. But at what price can we gain our freedom from these yet to be identified aliens? They’re pushing the human race to the edge of extinction if we can’t find a way to change things. But what will we have to change? What will we humans become to survive this threat. This is a time for heroes. For killers. For Grunts. Benjamin Carter Mason will be asked this question over and over as he dives deep into the nasty heart of an alien transformed Los Angeles. And in the end, he might be the last person on Earth defending not just our lives, but our humanity.

You know all about Weston Ochse and his Seal Team 666/Grunt novels, yes? No? Come on, if you don’t, then you’re missing out. Missing out big time, plain and simple. That’s just a fact of life son. As with every other novel Ochse has penned, ‘Grunt Traitor’ is the business. And when the business, I mean it. Balls to the walls action, characters that Arnie and Sly and JCVD wish they could have portrayed in settings Ridley Scott and James Cameron wish they had brought to the screen, with a longevity Bruce Willis would have been proud of. Just as in every other book Ochse has written. He’s the master of the high octane action thriller, and ‘Grunt Traitor’ is another feather in his camp and a prime time example of the author at his finest.

Yes, I’m an unashamed fan of Ochse Want to know why? Then pick up the goddamn book and find out for yourself. You won’t regret it. You’re welcome… Gav.