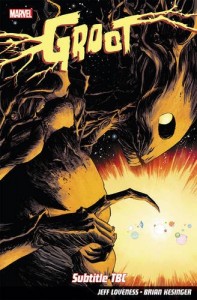 Who would’ve thought that a walking tree whose conversation skills are, at best, limited, from a relatively obscure team of anti-heroes would end up becoming one of the most popular figures in the Marvel Universe? Not me, that’s for sure. But then, I hadn’t bargained with the power of film and how a great director, fantastic cast and a thrill-a-minute, laugh out loud funny plot can change mainstream perception and opinion in less time than it took Apollo 11 to fly to the moon, plant the flag and return home safely. Happen it did though, and if I’m honest, I couldn’t be happier that a giant alien plant and a genetically altered, cybernetic raccoon have risen to the dizzying heights that they have and for once, I’m actually thrilled to be able to find, and occupy, some common ground with conventional society.  So, it wasn’t really surprising to find out that ‘Groot’ had been given his own book, but what was surprising was that I didn’t expect to enjoy it as much as I did.

Jeff Loveness’s story opens with Rocket and Groot finding themselves in a series of increasingly comedic situations as they attempt to make their way to Earth, a world that Groot claims never to have been able to “experience” properly.  Our heroes being who they are though, it isn’t long before trouble finds them and Rocket ends up being taken prisoner in an attempt to ensnare and capture his best friend whose bounty, it transpires, is exponentially higher than that of his marsupial comrade.  Determined to rescue Rocket no matter the cost, Groot begins to track the bounty hunter, and in doing encounters, and even manages to recruit to his cause, a rag-tag bunch of the most unlikely and endearing “heroes” to have sprung up in the four colour galaxy. Inevitably there’s aa action packed showdown, full of brawling, mayhem, explosions and good old fashioned violence, and not everyone makes it out alive, but it caps the book’s main arc perfectly. Having been reunited (and it’s not a spoiler, because you know, it was bound to happen. This is a Guardians book after all), our heroes finally make it Earth, and Groot’s real reason for wanting to visit the third rock from the sun is revealed, in a touching, endearing and heart-warming tale that’ll have even the coldest of comic book fans reaching for the tissues in order to “clean the grit from their eyes”.  Brian Kessinger’s art compliments Loveness’s story completely and utterly, both working in consummate synchronicity to deliver this wonderfully entertaining and intoxicating story. Absolutely marvellous…  Tim Mass Movement