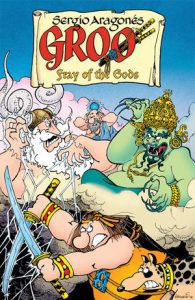 Faith and power are two of the fundamental aspects of the human condition The former resides at the heart of man’s need to believe in some sort of creator, one responsible for the arbitrary chaotic universe, and the quest for the latter is the all-consuming desire of a surprisingly large percentage of homo-sapiens. When you break it down, both revolve around control, the need to be in charge of one’s own destiny and rise above the masses and the desire to absolve responsibility for the fate of the world by pretending that it lies in the hands of an unseen omniscient being and as such has nothing to do with any of us lesser beings. And both lie at the heart of the latest Groo adventure, Fray of the Gods, as the bumbling barbarian and his constant companion, brains of the operation and faithful hound Rufferto become entangled in the affairs of a pair of Princes feuding over control of their Kingdom, their treasury and what it means to rule. While one desires to be worshipped as a God, the other wishes to merely govern his people and do what is best for all, which leads to them both employing Groo to enforce their system of control over their land, and others, by fair means or foul.  However, whenever Groo becomes involved in anything, things tend to go to Hades in a handcart faster than a Dodge Hellcat’s standing quarter mile time, which they inevitably do in Evanier and Aragones tried, trusted and true hilarious, laugh out style in Fray of the Gods.

Exploring the corruptive nature of power and the idea that lies at the heart of the “existence” of any figure purporting to be a “God”, that is without the belief in it and faith to nurture and sustain it such a creature cannot exist, Fray of the Gods does what Groo always best, via its central character it mocks, belittles and holds a mirror up to mankind so that we can see exactly how ridiculous we really are.  Using Groo to emphasise the fact that true wisdom is the realisation that one knows nothing, Fray of the Gods continues Aragones tradition of trying to ensure that we should all take ourselves a little less seriously and embrace the best that we have to offer rather than clinging to worst, and with Mark Evanier’s finely honed wit guiding the story, it never misses a beat from beginning to end. Continuing the legacy established by Goscinnny and Uderzo with Asterix, Groo uses the medium of fantasy to illustrate and illuminate the problems that society as a whole faces, and with Aragones distinctive, detailed and incredibly precise and individual art sharing equal billing with Evanier’s plot, Fray of the Gods is one of Groo’s finest moments. Never fear, Groo is here… Tim Cundle