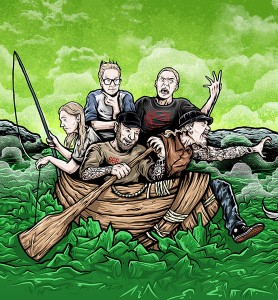 This should be their whole biography according to the GRAVEYARD SHIFTERS.

But obviously we want to tell you a bit more about them:
The Graveyard Shifters started in the fall of 2013 with singer J. Matilainen and drummer A. Salmenoja being abducted by alien invaders from the sky. But they were forced to return back to earth and make a change to the nowadays ‘polished music’ that infects our planet.
Matilainen and Salmenoja convinced their fellow musicians to join the mission by blackmailing them with the threat of alien experimentation! And so they started recording their debut EP, which was financed by returning empty beer bottles from the rehearsal rooms floor.
Now it’s time for the debut album „High Heels & Broken Bones“ which will be released in May.