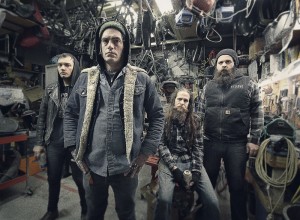 Relapse Records is extremely proud to announce the signing of underground, cult doom/sludge quartet GRAVES AT SEA. Formed in 2002, the band self-released the demo Documents of Grief which quickly became one of the most talked about underground demos of the decade. After recording their debut 7″ and a split with Asunder in 2004 and 2005 respectively, the band went on hiatus. GRAVES AT SEA are now stronger than ever, focusing their efforts on touring and recording new material. 2014 saw the group release their first new material in over nine years including a split with Sourvein and a separate two song EP.

Now thirteen years since forming, GRAVES AT SEA will record their highly anticipated first official full-length this summer with producer Greg Wilkinson (Brainoil) at Audible Alchemy in Portland, OR. The group commented on the signing and new material:

“So now this is gonna happen…We’re proud to say our first full length ever is coming out on Relapse Records. Relapse has been extremely cool to work with and we think it’s going to be a killer fit. Cheers. DFFD.”

Stay tuned for more info on GRAVES AT SEA including tour dates and more album details.

About Graves at Sea:

Graves at Sea was formed in 2002 by friends Nick Phit and Nathan Misterek, with then members Roger Williams & Steve Klatz (RIP). After self-releasing the demo titled Documents of Grief, they toured extensively and were quickly noticed by Greg Anderson of Southern Lord/Sunn, who released their 7″ Cirrohosis/Atavist Arise in 2004. Later in 2005 the band released a split with friends Asunder on Life is Abuse (CD) and 20 Buck Spin (vinyl).

In 2007 Graves at Sea went through a line up change when Nathan moved to Oakland and Nick moved to Portland, OR. After playing two final shows with Chiyo Nukaga (Noothgrush) on drums and Miguel Veliz (ex-Sourvein, The Roller) on bass, the band broke up in 2008. In 2012, however, they decided to reunite with Chiyo on drums and Greg Wilkinson (Brainoil) on bass, but due to touring restraints, Chiyo and Greg decided to step down.

2013 marked the band’s first venture to Europe with a lengthy tour including appearances at Roadburn Festival and SWR Festival and a string of West Coast performances. 2014 brought forth their first new material since 2005. Graves At Sea released their split LP with Sourvein on Seventh Rule records at the start of their second European tour (this time with Sourvein). The split was quickly followed up by an EP on Eolian records titled “This Place Is Poison” and numerous US performances including Maryland Deathfest and California’s Day of the Shred Festival.