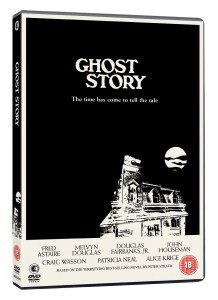 Generally speaking, I think there are probably just three main formats for scary films: the slash and hack – things like the Saw series or almost any zombie flick; the stalker/hunter – something like Nightmare on Elm Street or the film version of the Shining; and the more character driven atmospheric chiller – like the book of the Shining or Woman in Black.  Now there is nearly always a bit of crossover, and that’s a good thing; but for my money the character driven slow burn build-up of a good old fashioned chiller wins every time. And that what Ghost Story delivers as well as any I’ve ever seen.

In this Peter Staub adaptation, there is a strong sense of Henry James as the sins of the father(s) are gradually delivered upon both the sons and then back upon themselves. Four elderly gentlemen – lifelong friends – are forced to face their past, both in their dreams and then in reality when the apparent suicides of father and son are found to be linked by an old photograph and the ex – fiancée of the surviving son (Wasson). The quartet of old luminaries playing the four friends is the kind of bonus that was there in its first release in 1981 to bring in a more mature audience and to add credibility. For today’s audience they may not hold the same mystique or level of fame, but their quality is still undeniable, as they bring a kind of leisurely gravitas that supports and binds the growing sense of dread and creepiness.

I must confess this film isn’t new to me as it scared the bejesus out of me as a teenager; but I wonder now that if you were watching this for the first time, it might potentially suffer due to its standard-setting masterclass in tension building. By which I mean this: it’s so good at what it does that it has been copied, re-worked and referenced in a hundred films since (think “What Lies Beneath”, “Rose”, “The Others” and so on) which ironically can make the original seem derivative or unimaginative which is really unfair.  To me though, it was just as engaging, shocking and creepy as it was when I saw it last.  Time cannot fade this quality of writing nor dull the quality of performances across the board.  A wonderful spooky Christmas treat. Emma Mass Movement