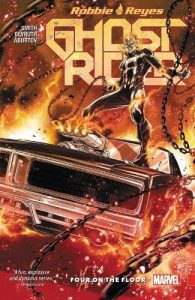 Ghost Rider emerged from the darkest recesses of the Marvel Universe’s heart and since he first appeared has continued to dwell on, and around, those stygian fringes. The spirit of vengeance who punishes the damned, he embodies the idea of the anti-hero and even though his digital age incarnation has abandoned his traditional form of transport, the motor cycle (long considered the vehicle of choice for the rebel, the outsider and those who exist on the edge of modern society), in favour of  Hemi powered American muscle while embracing a more wholesome image as a young man just trying to look after his little brother, he’s still what is popularly known as a “bad ass”. Robbie Reyes may well make Johnny Blaze look like the Devil himself, but when he gets behind the wheel with the spirit of “Eli” and the Ghost Rider takes over, he becomes the scourge of the wicked and the thing that all criminals fear.

While he’s become a four, rather than two, wheel avatar of retribution, Robbie Reyes is much more localised than previous incarnations of Ghost Rider and primarily wages his war on the criminal endeavour and evil within his own gang-infested neighbourhood, which is where Four on the Floor unfolds. Coming to the aid of the new Hulk and Wolverine who have been forced, by circumstance, to team-up to battle a strange power stealing creature, while warily treading around and investigating a new “work” colleague who has returned to the area after a long time “away” and battling Eli for control of his own mind. Felipe Smith’s full throttle, foot through the floor, non-stop, action packed, monster battling tale drags Ghost Rider into the internet age while ensuring that its original spirit continues to burn brightly.

Being something of a MOPAR enthusiast and having next to no time for motorised scooters, Robbie was always going to be my Rider of choice, and Smith continues to flesh him out and build his back story and character in Four on the Floor.  Even though he’s a little too “stand-up” at times, Robbie is essentially everything that Ghost Rider should be, a blue collar guy trying to come to terms with, and accept, a bad deal that he made for the right reasons. With Danilo Beyruth supplying some gorgeously detailed car porn and wonderfully cartoonish superhero action to back up Smith’s story that’s constructed around the age old housewife’s advice about judgement, books and covers and appearances and how initial perception can at best be faulty and at worst lead to catastrophic repercussions, Four on the Floor is a solid, enjoyable, cameo filled adventure that serves to reinforce and solidify Robbie’s role as the Rider. Gentlemen, start your engines…  Tim Cundle