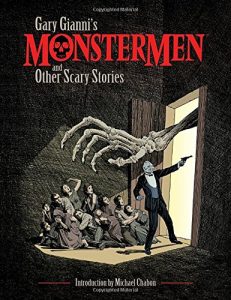 I am shamed to admit that I had not heard of Gary Gianni. Yep, that Gary Gianni, writer and artist of, among other works, a graphic novel of 20,000 Leagues Under The Sea, the newspaper strip Prince Valiant, and the Eisner Award-winning Batman story, “Heroes.” The Gary Gianni, in fact, who after many years could tempt me back to comics, were he to have created them all and I in possession of a spare thousand pounds a month.

Gosh, you say. Mike likes something? Yes, reader, he does. He likes a lot. It’s no exaggeration to say he cannot remember the last time he became so excited about turning a page of a graphic novel, to see what strangeness would be proferred in pen-and-ink on its other side. Gianni is a genius with splashes and his unique style delivers images that are not only deep and detailed but delirious and dream-like – landscapes that are a few steps askew from our own and that at one and the same time you want to step into yet shy quickly away. Fighting in their bad corner there’s a glorious cast of monsters such as Jib-Bics and Puttyfoons – the hell-dragging minions of Lord Gooseflesh – and in the good, the ancient order of Corpus Monstrum – the Monstermen – these days a somewhat loose alliance of movie mogul Larry St George, reporter Sunset Lane, ‘Mr Fixit’ Hodgson and the one survivor of the original order, Benedictus. The armour-helmeted Benedict, as he’s now known, goes about his business with an ages-old doggedness that is no better exemplified than in the story “The Skull And The Snowman”, when he’s asked about his current destination of the Lamasery of Tsin-Tsin Dagh, the fabled City Of The Nine Hundred And Ninety-Nine Monks.

“Once. When a thousand monks lived there.”

I have only two complaints. One, that Monstermen was only ever the back-up strip in Dark Horse’s Hellboy comic, and two, that it was relatively short-lived. The totality of its existence is the five four-part-or-so stories gathered in this collection, a quality if not quantity of content that would make for a slim volume but for the inclusion of a number of classic horror stories by such genre masters as William Hope Hodgson,  Robert E Howard and Clark Ashton Smith. These are prose but illustrated by Gianni. Still – despite the brevity – you’re in for some clever tricks and an overall treat. I suggest you get out there and buy it, or the Mustacchio Demoniac will come swoop in your face. Mike Wild