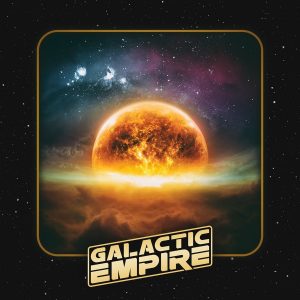 A long time ago in a city not all that far away, my life was irreparably changed for the better when, sat in a cinema in Liverpool, my mind was completely blown (and hastily reassembled) by Star Wars. It became an aching passion, one that I was dedicated to above all others until five years later in 1982 I discovered Dungeons & Dragons and Heavy Metal.  And now, three and half decades later, an all-conquering force that combines two of the greatest loves of my life, Metal and Star Wars, has  fractured my psyche. Again. I mean, come on, what’s not to love? It’s metal and Star Wars, played by a group of individuals devoted to the Dark Side, whose technical ability and musicianship are simply staggering.  Galactic Empire have taken the most familiar, and immediate, compositions from the films, reworked them as progressive metal masterpieces and have crafted an immediately familiar, and frankly astounding record, that verges on entering classical hyperspace and is only prevented from doing so by a Math Rock tractor beam emanating from a hidden Imperial facility somewhere on the far side of Yavin 4.  The Force is strong with this one… Tim Cundle