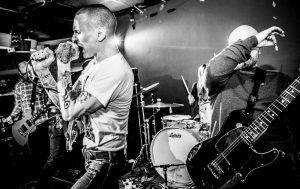 Providence powerviolence henchmen FUCKING INVINCIBLE have confirmed their next studio and tour actions, announcing a split 7” EP as well as a West Coast US tour, both of which are rapidly approaching in the coming weeks.

Less than a week after the tour ends, FUCKING INVINCIBLE’s new split 7” EP with the Netherlands’ negative hardcore outfit Lifespite, members of Blind To Faith and Left For Dead, will see release. The record will be available on October 7th through FI’s trusted allies at Atomic Action! Records, and promises to be a succinctly violent releases of devastating proportions. Audio samples and additional details on the split will be released in the coming days.