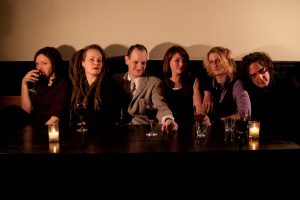 I’m sure that I’m not alone in thinking that the majority of so-called ‘punk bands’ doing the rounds at the moment are simply going through the motions, cranking out third generation imitation riffs, desperately trying to jump on a bandwagon that’s long since crashed and burned. There are, however, a small minority of bands, who are fuelled by creativity, intelligence and passion, creating music so powerful that it immediately enters your subconscious and refuses to leave, setting up permanent camp in your cerebellum, reminding you how good things used to be, can be and will be again. The World / Inferno Friendship Society are at the forefront of this minority, fusing swing, folk, Americana, rock and roll and punk rock with insightful, emotive lyrics, and have crafted a genre of their own, that exists within and outside of punk rock simultaneously. I caught up with frontman Jack Terricloth for a chat about the method behind the madness and what being a punk really means in the twenty first century…

MM:I guess the best place to start is at the beginning – would you like to both introduce and tell us a little bit about yourself?

Jack: My name is Jack Terricloth, I am currently sitting in an empty Brooklyn bar in the afternoon drinking my second martini and about to answer some questions about my role in the popular World/Inferno Friendship Society, a crazy lifestyle choice which makes music.

Jack:  I’d have to think about that if anybody asked me I still haven’t been asked but I’ll stop being pedantic.  I’ve noticed that the things you think are attractive about yourself are usually the things your friends have to strain to stop throttling you about. I think the people who know me find it much more strange that I remember conversations we had decades ago than that, say, I am still playing in a band.

MM: Do you want to tell us about The World /Inferno Friendship Society?

MM:  Can you share a little of the bands history with us?

MM: Where did the bands name come from, and what, if any, significance does it have?

Jack: It comes from the future where little children will chant it in the fields mourning their parent’s deaths against aged Church of England paedophiles who want to rule the world.

MM: I’ve heard TWIFS described as musical collective rather than a band, and I wondered how you saw TWIFS?

Jack: I see World/Inferno Friendship Society as a Hope that various people hold at various times with varying levels of conviction that the bastards will really never be able to grind us down.  .

MM: How would you describe TWIFS in a musical sense?

Jack: It sounds great, the kids dig it.

MM: Do you think TWIFS is a pure punk band, or do you think of it as more like musical fusion  or something else entirely different?

Jack: We’re all punks so a punk band we must be!

Jack: Yup, known those kids since before I had to shave everyday. I would feel completely comfortable burying a burlap sack dripping blood in a shallow grave for them and never talk about it again.

MM: So…What does the term punk mean to you? A musical genre, a social movement, a philosophy, a life-style, or (again), something else entirely?

Jack: Punk is an attitude not a musical style.  If it were just a style of music- damn we’d be dull and stupid people.  If this whole thing had ended with The Dead Boys? What a waste that would have been.

MM: Again, following on from the last question – do you think the term ‘ punk’ means as much today as it did ten, twenty or thirty years ago, or has it become a throwaway catch all frame of reference for lazy music journalists and desperate kids looking for somewhere to fit in? Has the punk scene lost its way and sense of direction? Why…?

MM:  Time to talk about the new record, ‘The Anarchy And The Ecstasy’…

MM: How, if at all, do you think it differs to your previous records?

Jack: I hadn’t played guitar for a while- I think it sounds more like our early singles than our album work. I don’t do guitar solos…

MM: Given the nature of The World/Inferno Friendship Society, and the way you incorporate and utilize a kaleidoscope of different musical genres, how difficult was it to write the record?

Jack: It took 27 musicians, one studio, Producer Dan Shatzky and 5 months in the blazing hot Brooklyn sun interspersed with amputations, evictions and addictions to write and record The Anarchy and The Ecstasy.

MM: And how does the creative process work with you guys?

Jack: We truly collaborate. There is no mastermind.  Who ever shows up gets their say-who ever don’t: don’t.

MM: Lyrically, you guys manage to avoid cliché and explore different avenues with your songs.

MM: I wondered where your lyrical inspiration came from?

Jack: On the whole I try and avoid personal topics-going more for issue or historical subjects but I have to admit I failed this time.  That might account for the better reviews.

MM: What, and / or who inspires you lyrically?

MM: Time and time again with the new record I keep coming back to three songs, ‘The Disarming Smile’, ‘Canonize Philip K. Dick, OK’ and ‘The Apple Was Eve’…

MM: So, I wondered…Why Philip K. Dick? What is (or should that be was, given that he’s deceased?) it about him, or his books and stories, that made you want to write about him?

Jack: Phillip K. Dick was one of those authors who are so skilled at what they do that you really get into his head.  You get into his head and realize that there are layers upon layers of realities where an infinite number of individuals are sitting in an infinite number of cars outside your house waiting for you to slip up- just once- so they can scribble it down in their notebook, smoke a cigarette and hate their  . . . they don’t know what. They don’t care any more than you do. We play Cops and robbers and kick through our lives wondering if we are real or fake but mostly spend all of our disposable income trying to not admit that Phillip K. Dick’s head is our very real, our very real reality.  “Canonize . . .” is about the paranoia that you are wasting your life and all will come to naught. Who better to describe paranoia than Mr. Dick?  He was sure they were against him AND THEY WERE!

MM: I don’t have the benefit of a lyric sheet for ‘The Anarchy and The Ecstasy’…

Jack: As I am very busy and haven’t the time to look them up on either your well designed Inferno website or many enthusiasticly updated fan sites – talk about lazy journalists!…

MM: I wondered if you could explain what ‘The Disarming Smile’ is about?

Jack: ‘Disarming’ is a song I wrote for Sturgeon from that Left Over Crack band to sing. He and I had an argument at the Ottobar in Baltimore about me appearing on the second Star Fucking Hipsters album which I didn’t want to do and made up by agreeing to do a split 7 inch where we’d perform songs written by each other. That never happened but I wrote the lyrics that night on tour about what I thought Sturg and I had the most in common: lifer punk rockers on the road

MM: And ‘The Apple Was Eve’,what’s that about?

Jack: It is about a love triangle when it is too late to apologise about it.

MM: Is there an underlying message, or recurrent theme running through your songs?

Jack: Probably, as I wrote all the lyrics.

MM: There seems to be a common thread flowing through most of them, that is to escape from the drudgery of the world forced upon us by social convention and the rules that govern the way in which society work? Does it exist, or is just  a beautiful accident…?

Jack: It does exist and you have stumbled across it by a beautiful accident- which never happened.

MM:  As a number of demo’s for the record were freely available online before it’s release, do you think this had any notable effect on the album, both before and after release?

Jack: It did not have any effect on the album before its release as we didn’t like them and stopped listening to them.  After its release it gave reviewers the opportunity to say they liked the demos better rather than they liked ‘Addicted To Bad Idea’s’ better.

MM: How do you feel about internet and music? The age of the legal and illegal download? Is piracy an inevitable consequence of technological development and people’s desire to hear and experience new music and film, or is it a direct result of major label and studio greed and nearly a century of profiteering from artists, musicians, authors and actors?

Jack: Even though it very much costs me profits I am sticking with “information wants to be free”. Sorry SESAC.

MM: Tell us about your annual Halloween show, Hallowmas?

Jack: It is the birthday of us all.  We plan for it all year and can not wait to see you there.

MM: What’s next for TWIFS? What are your plans for the next twelve months, and what do you hope lies just over the horizon for the band?

Jack: We are on tour for the next 2 years like we are every time we release a record!  I hope I don’t die before I get to record another record! Do you know how hard this work is?

Jack: Yes, that the future is good and unwritten. That there are better angels and better angles. That 99% of success is showing up, so fucking show up! That American acts bleed way into the third or fourth. That I gained satisfaction in learning that the Englishmen of the 15th century drank water only as penance. That every saint has a past and every sinner has a future .That every person you wished would call thought about calling you every night. And that I hope Jim Carroll knew he died beloved. 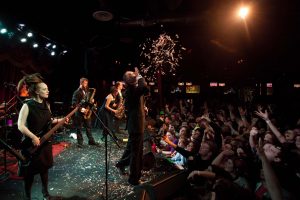