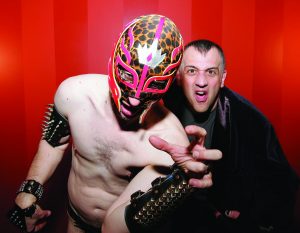 Actually, I’d say “The Dwarves Are The Best Band Still Around”.  That’s more like it.  We have to remember The Ramones, Black Flag, Dead Kennedys, etc.  But since they are all dead, some of them actually six feet under, The Dwarves win.  They play loud, fast, and snotty.  And some how, also very very melodic.  I guess we can blame that on Blag’s (the singer) brain.  The guy thinks in ways that are always creative, always “outside the box” (which he has not problems getting into, wink wink, nudge nudge) and always funny.  And I mean FUNNY.

Like the song “Working Class Asshole” on “The Dwarves Are Born Again”.  If you just listened to the music, you’d think it was your better than average Oi band.  You know, with all the silly tough guy shouts in the background, and lyrics about blue collar working and stuff.  But when you listen, you hear it’s actually about how those baldheaded walking penises are just suckers, following a system that actually fucks them over.

Also, it should be known that the Dwarves are hated.  Not by everyone, but by lots of folks.  And what good Punk Rock band isn’t?  These clowns will poop in your living room, and you’ll like it.  But unlike the late G.G. Allin (a good friend of the band’s),  it smells like roses, not dope, whiskey, shit and piss.

I guess I really started to really like them with the release of “The Dwarves Are Young And Good Looking” first out on Recess Records in the mid nineties.  Never had I heard a band with such mean, evil and funny lyrics so, well, poppy!  In a Punk Rock/Hardcore sort of way.  Lyrics about crushing skulls under you limo, and boffing thirteen year old girls.  This band spoke to my soul!

From there I went a bit backwards with their history and found albums like “Thank Heaven For Little Girls” and “Sugerfix” fun, and their first big hit album on Sub-Pop, “Blood, Guts & Pussy” almost as short and cool as the first Circle Jerks album, “Group Sex”, but it just wasn’t as good as what they had become.  And the stuff before that, to me, is just raw rockabilly.

Oh, it needs to be mentioned here that The Dwarves are the kings of media manipulation.  Which is probably why they are so hated.  Probably by rock reviewers.  They’ve faked their own guitarist’s (HeWhoCanNotBeNamed) death, fucked over major label douchbags, done five minute to five second live sets and the like.  God, am I jealous!

Next up for Blag (real name Paul Cafaro) and company was a brilliant follow-up with “The Dwarves Come Clean”.  More Punk Rock  Pop that showed the youngsters how it was done.  The right way.  When this album came out, a whole new generation of kids were just discovering the Punk Rock, and this album was a brilliant introduction.  Songs about NOT getting laid from lesbians, fucking, killing, and getting high (typical themes for The Dwarves), and of course, rape, made this a “naughty” album that would piss off any parents who actually listened to the lyrics.  But at that time, the whole “Punk Pop” thing was in full swing and every band sounded the same,  The Dwarves used that cover wonderfully to slip in ideas to make kids really think, while listening to music that was actually enjoyable.

“The Dwarves Must Die” was the last album before this one, and just hearing Gary Owens of “The Gong Show” fame announce the players in the band thrilled some of us old-timers to no end!  Our peers had become the Gods Of Rock who ruled stadiums.  At least in our minds and in our hearts.  And fuck if these guys don’t deserve that.  Their music is light years ahead of anything else you’ve ever heard, mixing all kinds of genres together, creating what can only be called “Dwarvecore”.  And it’s so unique no other band will ever come close to sounding this good, and anything like these guys.  They are as unique as The Beatles.

Which brings me to my next point.  The Dwarves Are The Beatles of today.  They started out in a very raw rockabilly punk rock arena, sounding like everyone else.  Just like The Beatles doing covers.  But then something changed, and the band started to experiment with sounds and genres, and something totally new and wonderful was born.  Then that sound was mixed up again and something else beautiful and fun was born.  Kind of like “Sergeants Pepper’s”.  And now comes the wonderful violence on the new album with songs like “FUTYD” (Fuck You Till You Die) and “Your Girl’s Mom” that have you wanting to fuck, kill and laugh, all at the same time.  Awesome.  It’s The Beatles “Helter Skelter”.

To really understand The Dwarves, you really have to listen to the new album, “The Dwarves Are Born Again”.  You’ll hear all the musical stuff I’m talking about, and then some.  Also check out Blag’s side project, “Candy Now”, which is also the name of a song on the new album.  It’s a sort of retro-lounge act sort of thing that is funny, melodic, and catchy as hell.  It WILL make you smirk.

To say the new Dwarves album is the best one yet is probably an accurate statement.  The Dwarves continue to grow and grow, and Blag continues to learn how to push and pull knobs in all sorts of directions, like Dr. Who on the Tardis, and beautiful things and tones happen.  It’s pure magic.  Blag puts something there that no one could even think of.  Except for Blag.  Being outside the box.

Anyway, after I heard “The Dwarves Are Born Again” I knew I had to interview The Dwarves’ lead singer.  It was time.  We’ve both run in the same circles for quite sometime now, and I’ve always admired the guy, but wondered about him and his origins as well.  Like Spiderman or something.  Blag’s a cartoonish super-hero to me, so finally getting to ask him some questions for Mass Movement is quite an honor.

What follows is a few words with a man who is a true artist, pervert, egomaniac, man-boy, stud and creep.  And I really sincerely mean that from the bottom of my dark and jealous heart.  Oh, did I also mention he’s one of the kindest human beings on the planet?

But you knew that, didn’t you?

MM:  According to the internet, you were once a band called “Suburban Nightmare” from Chicago.  Who in the Dwarves was in that band as well, and what years did that band exist?  Any recordings?

MM: What was Paul Cafaro like in Elementary, Junior and Senior High School?  Did you have good grades?

BD:  I alternated between wiseass and dumbass, working little and getting average grades. Then I discovered drugs and, ultimately, vaginas. That was the beginning of my undoing.

MM:  How old were you when you first got laid?  How old was she and where did you do it?

BD:  I was 16 years old and so was she. I don’t remember where we did it, but it didn’t take very long. I still prefer dry humping to intercourse sometimes.

MM:  How did the name “Blag Dahlia” come about?

BD:  It started as Blag Jesus, then Blag the Ripper, Blag Tuesday, Paint It, Blag and Blag History Month.

BD:  It’s impossible for me to know that. I do get far more pussy than most guys in bands, but that’s because my band is so good and so many of the rest are retarded.

BD:  I would advise buying the brand new record the Dwarves Are Born Again to find out exactly what we’re talking about. If you hate music just watch the free DVD!

MM:  Can your body still handle lots of Cocaine?

MM:  Do’h!  The “Candy Now” album is very awesome.  Everyone I play it for loves it.  Even old people and five year olds!  How was it working with Angelina Moysov, and are you guys dating?  If not, would you consider it?  Can you put in a good word for me…

BD:  “Candy Now” was a cool record that kind of went under the radar. I would consider dating Angelina if she would stop putting on that fake Russian accent and admit she actually comes from Duluth, Minnesota. But we are going to make more records together with Tom Ayres, the guy who played every instrument on that record.

MM:  Speaking of “Candy Now”, which came first, the band name or the Dwarves song?

BD:  In was driving this girl home late one night, it was about 10 minutes to closing time and she wanted a piece of candy. I said I’d stop, but I kept forgetting and the minutes were winding down. Every time we would pass a store she would get all excited and scream out, “Candy, candy” and I kept putting her off until she really got pissed and screamed, “Candy Now!”, and that’s how another legend was born.

MM:  Are you and HeWho friends outside of the band?  Do you hang out together?

BD:  HeWhoCanNotBeNamed is a Rock Icon, he is all things to all people. You serve in the Dwarves at his pleasure!

MM:  I had a great experience working with Todd and Recess Records.  How do you feel about him and his label?

BD:  Todd is a lyrical genius. That’s why I suggested he try his hand at pantomime and he’s doing really well with it.

MM:  Double Do’h!  What do I do if I find out AFTER I sleep with a girl that she is way underage?

BD:  Thank God for the low self esteem of underage girls.

MM:  When you played here in NYC at Coney Island High, you went on and on about “rockstar pants” they had across the street at Trash & Vaudeville.  Do you now own a pair or two?

BD:  I am a proud wearer of the Dogpile variety, but T and V will do in a pinch as will any comically tight pants. You feel like Spiderman.

MM:  Cool!  How did it feel seeing Jim Carry sing “Motherfucker” in “Me, Myself & Irene”?  Did you get laid from it?

MM:  What the best advice you’d give any youngster getting started with pussy?  WWBDD?  (What Would Blag Dahlia Do?)

Check out “The Dwarves Are Born Again” and other cool shit at www.thedwarves.com