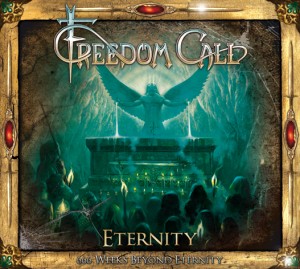 Freedom Call – 666 Weeks Beyond Eternity CD (Steamhammer/SPV)
Power metal has never sounded so good. Freedom Call reminisces a time when the keeper of the seven keys ruled mightily! Churning out speed filled riffs, and melodies that will only have you singing along with superior gusto, the happiest band in metal return with a founder member Ilker Ersin (bass) and quite relevantly re-release the 2002 album ‘Eternity’. This two disc version features numerous bonus tracks in various guises along with the brand new song cunningly titled ‘666 Weeks Beyond Eternity’. Brimming with positivity the anthemic metallic commands and the huge chorus sections make it impossible for anyone to ignore these Germans. Lashings of guitar work and not one down-tuned note plant Freedom Call in a pleasingly accessible place and their army of fans will only be ever growing. Mark Freebase