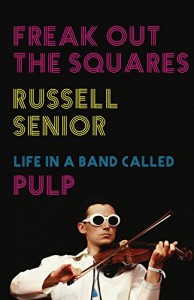 I might as well be candid and admit up front that I’m not a Pulp fan. In fact it would be fair to say that I absolutely loathed them, not just in a musical sense, but also because they seemed to embody not only the patriotic egotism of most (if not all) of Britpop bands, but also an arrogant and aloof smugness that seemed to sneer at the intellectual inferiority of those not privy to their highbrow artiness. It almost felt as if playing music was below them, and judging by some of Russell Senior’s comments throughout ‘Freak Out The Squares’, I suspect that there were times when he felt exactly the same.

Personal gripes about the band aside, guitarist/violinist Senior has an unusual style of writing a music biography. Literally alternating between the bands early years (and Senior quitting the band at its height in 1997) and it’s ‘Reunion’ tour in 2011, he eschews the usual tour shenanigans and pseudo psychological self-analysis, instead providing a potted history of the bands incarnation in Sheffield, the constant interpersonal bickering (a recurrent theme throughout the bands various line-ups), love/hate relationships with fellow Britpop bands (the Longpigs, Elastica, Suede, Blur, Menswear,  Auteurs and Oasis) and an almost Sunday Times Travel Supplement style appraisal of the countries and hotels the band visited throughout its touring days; all of which makes for a slightly more engaging read than the traditional groupie/drug/alcohol fuelled hedonism of most music memoirs.

There can be no denying the amount of commitment and effort the band dedicated to achieving success, even though fame seems to have been a bittersweet dish and the chase more enjoyable than the catch; with internecine fighting between members festering throughout the bands entire history; and I finished the ‘Freak Out The Squares’ with a slightly higher opinion of the band than I started, and despite his occasional lapses to snobbishness with a smattering of sarcasm I rather enjoyed Senior’s style. I still hate ‘Common People’ though.  Ian Pickens