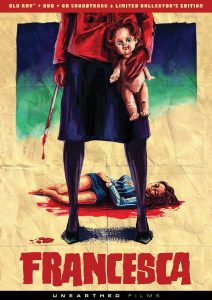 When the body of a murdered woman turns up in a park, two detectives must look to the past and reopen a case of a missing girl in order to find the person responsible. We’re shown in flashback that the girl in question was the perpetrator of a vicious attack against her sibling, which is only the beginning of a violent spree undertaken by a killer hell bent on piling up as many bodies as they can. Will the detectives manage to shake a reputation of incompetence and find the killer before the police force is further embarrassed?

Emulating a harshly graded film stock with out of time Italian re-dubbing, Francesca certainly stands out from most of the horror crowd this year from both a visual and storytelling point of view. A precursor to the American slasher movie, giallo’s were produced in Italy, and were the movie equivalent of the popular whodunnit books, generally with a generous helping of crimson as we witness each killing.

The text in the leaflet included in this disc set says a lot about how horror movie trends work – alluding to the fact that after ‘Grindhouse’ was a runaway hit, every amateur filmmaker immediately ran out and tried to replicate the style, often to horrific results. The desire here is that other filmmakers will simply see Francesca and simply admire it, as oppose to weakly attempt their own version. We can only hope, right?

The classic Italian giallo movies are very distinctive in their approach, and making one using straight modern techniques would rob the genre of what makes it special. To his credit, director Luciano Onetti has done such a masterful job in recreating the 70s feel, I’m sure I’m not the only one fooled by the trailer into thinking it was simply a remaster and not a fresh release. From the stylistic, oversized, introductory typeface, to the sharp ending that characteristically comes crashing in within seconds of the reveal, there’s hundreds of subtle and less than subtle nods to the original films he skilfully pays homage to.

Sadly, the storytelling itself isn’t quite up to the quality of the visuals. Pacing is somewhat of an issue despite the short runtime, and due to paying such deep homage, it doesn’t feel particularly original in terms of plot. However, given we’re already used to janky scripts and dubious acting in these films anyway, it’s not as if giallo fans are expecting anything but a flawed movie and hopefully most are happy to look beyond its shortcomings.

Given that the masters of the genre like Dario Argento are often heavily criticised by a regular movie goer, there’s no doubt that Francesca will certainly split opinion. Those that love the classics are certain to be impressed by the quality of the production, while those without any history might wonder what the fuss is about. Instead of jumping straight into Francesca, it might be worth visiting some of the classics beforehand in order to get a feel of what Onetti has tried to accomplish.

Unearthed Films have gone out of their usual ballpark of providing viewers with extreme, shocking cinema with this release and it’s to be commended. Presented in a 3 disc special edition (1x DVD, 1x Blu-Ray, 1x CD Soundtrack), full marks have to be given for the quality of the package. Even the small leaflet included has a yellow band at the top, which is a nice touch as it represents the style of the original murder novels that became such a phenomenon. James Connors