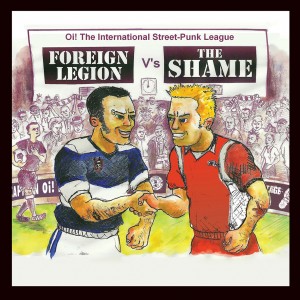 Foreign Legion/ The Shame – split 7″ (Aggrobeat/ Rebel Sound)
Not too long after their album “Light At The End Of The Tunnel”, Welsh clockwork punks Foreign Legion are back at you with two new tunes. Very much in the same vein as that album, here you have two punk rock oi oi anthems, served straight up, with the immediately recognisable vocals of singer Marcus making this unmistakeably Foreign Legion. Lyrically both tunes are an attack on society and the state of the country we are living in. Not cheery by any stretch of the imagination, but these are tough times we are living in and Foreign Legion provide the perfect soundtrack. Flip the disc and sail across the pond, and you have two tracks from Tulsa, USA punk band The Shame. Their sound is a little more upbeat, and this trio choose to drown their sorrows in beer rather than politics. Whilst the Legion have a very British sound, The Shame play the American version of the style, think bands like Anti Heros or Rancid rather than The Business or The Oppressed. A well balanced EP. Tom Chapman