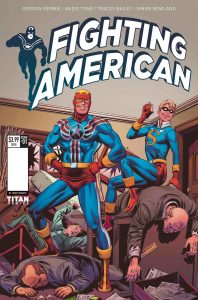 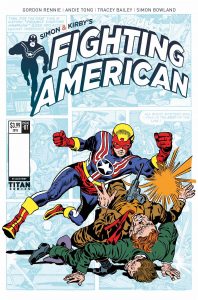 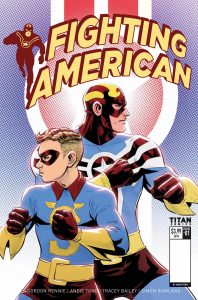 Titan Comics is thrilled to announce a brand-new creative team, and a fresh new adventure for Fighting American: The Ties That Bind #1, coming in March 2018.

Fighting American first appeared in 1954, created by the minds behind Captain America Joe Simon and Jack Kirby. In their original Fighting American series, Simon and Kirby introduced readers to Nelson Flagg who took part in an experimental US Military procedure that saw his mind transferred into the enhanced and revitalized body of his dead brother, Johnny Flagg, to become America’s first and only super hero, Fighting American.

“It was exciting to hear that I would be involved in the second arc of Fighting American, taking over from the talented Duke Mighten, and carrying on the legacy that Mr. Joe Simon and Mr. Jack Kirby started,” said new series artist Andie Tong.

Fighting American: The Ties That Bind #1 will go on sale in comic book stores on March 2018