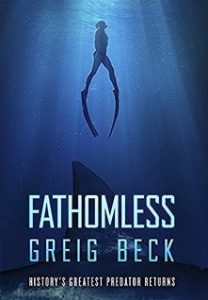 Hidden deep underneath the icy stone of Alaska lies a hidden sea. This unfathomable body of water has been sealed off from the rest of the world for millions of years. Only an ancient legend from the locals has led to the discovery of ‘Bad Water,’ the home to forms of prehistoric life long believed extinct. What lies ahead is a trip through discovery, danger and even political intrigue; one that will keep you reading long after you should have gone to sleep to have nightmares of the crushing deep and razor teeth.

Fathomless is my first experience with Greig Beck and I am duly impressed. This book has all of the makings of a Best Seller. The story is gripping, the characters are very real and three-dimensional and the situations they find themselves in are scary and exciting enough even for me, that most jaded of reader. Here he has found a way to take elements we find commonly in modern literature and make them his own and turn them into something new and refreshing. As a matter of fact knowing there was a Carcharodon Megalodon in the story almost kept me from picking up this book because I am such a huge fan of Steve Alten’s Meg series which features, of course, the long extinct Megalodon species. I’m glad I fought past that impulse though because I would have missed out on some great action. For some reason the oceans, seas and other bodies of water creep me out even though I live in Florida on the Gulf Coast where we have thousands of lakes, streams, ponds, springs and even the Gulf of Mexico. As a horror fan, I have to go deep to find something that makes my hackles rise and my breathing get shallow. Fathomless is just such a book and I salute Greig Beck on this tome. This novel deserves to sit beside Tom Clancy and Stephen King at the check-out stand with the #1 Best Seller logo at the top of its cover. Jim Dodge