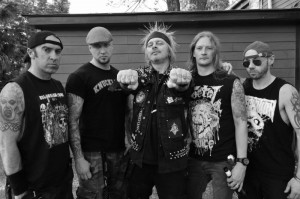 The band’s first studio output in six years was captured at Springvale Studios with longtime producer Mark H. Harwood and sees EXTREME NOISE TERROR returning to their hardcore punk roots with a manic, stripped down and relentlessly aggressive, bone raw sound that perfectly complements the chaotic attack that saw the band become a firm favorite throughout the ’80s and ’90s among punk and metal fans alike.

Extreme Noise Terror features the lead guitar talents of guest musician Kody from Singapore hardcore punk band Minus and includes a cover of “I Like Cola” by ’80s Japanese hardcore pioneers, Outo, that sits nicely alongside twelve of the band’s fastest, most intense and blatantly catchy tracks to date. Proclaims frontman Dean Jones of the recording, “Thirty years of pissed off hardcore punk madness and mayhem condensed into thirteen brand new tracks, the most savage ENT yet! If this doesn’t blow your head off nothing will!”

Says Decibel Magazine of today’s premiere, “Have you read Choosing Death? If so, you know how important EXTREME NOISE TERROR are to the improbable history of grindcore. Despite roughly a trillion lineup changes in their thirty years of existence, ENT are dropping their self-titled full-length on Willowtip, their first since 2008’s Law Of Retaliation. See if Dean and the boys still have it (spoiler alert: they do) via leadoff track ‘Punk Rock Patrol.'”

Forged in Ipswich, England in 1985, EXTREME NOISE TERROR is widely considered one of the earliest and most influential European grindcore bands, and particularly the forefathers of the crustpunk and grindcore subgenres. The original idea was to set out to be the fastest hardcore punk band ever, consisting of dual vocalists Dean Jones and Phil Vane (RIP), guitarist Pete Hurley, bassist Jerry Clay and drummer Pig Killer. Vane and Hurley had previously played with Discharge-influenced acts Freestate and Victims Of War, whilst Jones and Pigkiller had been in Raw Noise. Aside from Discharge, the band cite Anti Cimex, Rattus and Kuro, as early influences. EXTREME NOISE TERROR signed to Manic Ears after a solitary gig supporting fellow Brit punks Chaos UK, releasing a split LP with the band in 1986 entitled Radioactive Earslaughter. Although there were musical similarities between the two bands, EXTREME NOISE TERROR were already beginning to twist hardcore into what would later become known as “grindcore.”

Following a slew of full-lengths, EPs, splits and live offerings as well as a revolving door of personnel shifts, EXTREME NOISE TERROR shows zero sign of mellowing out or slowing things down three decades since their initial formation. Heavy-as-fuck and pissed off grind is what defines the ENT sound, and this album further cements the band’s status as the reigning kings of all that is heavy. Hardcore punk, crust or grind? This is EXTREME NOISE TERROR.