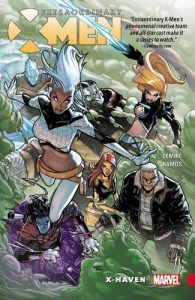 Strange things are afoot in the former Xavier School. Having been forced to flee from the continuing persecution of homo-superior following the fallout from the actions of Cyclops and the Inhumans, the X-Men, thanks to Magick, as X-Haven begins, are now located in Limbo, far from the prying eyes of humanity. But time is running out for the X-Men and mutants as a whole, as the Terrigen incident has had another hidden effect, one that no-one could have foreseen until Beast searching for a cure discovered the awful truth. That being exposed to Terrigen has also rendered all of mutant kind sterile, and as such, the current generation of their species will be the last. Facing an uncertain future, Storm decides to recruit a team of X-Men who will help her face the unseen and unexpected challenges that are bound to cross their path. Which as it turns out, is easier said than done and leads to the school having to face, and fight, a demon horde, confront an old foe, one hell-bent on fixing the Terrigen “issue” in his own horrifying manner, and his latest recruits and welcome some familiar, and very welcome, faces back, as Jean Grey, Colossus, Nightcrawler and Old Man Logan return to the fold.

That’s right, Logan’s back. While he may not be the same Wolverine who bit the bullet not so long ago, he’s still (sort of) the claw toting, cigar chomping, sideburn wearing, always ready to rumble, most universally recognised X-Man of legend. Having the older, but not much wiser Logan as a member of the X-Men, gives Jeff Lemire a chance to explore the relationship between him and Jean Grey from an entirely different perspective, as Jean becomes almost a surrogate daughter to him, and he becomes a father figure for her.  It’s different, it’s beautifully realised and it works on multiple levels. And talking of relationships, Lemire does something similar with brother and sister Magick and Colossus, utilising their bond for the benefit of the team while further charting their familial history, giving the reader a little more insight into what drives and motivates them to stand and fight as X-Men. Filled with rich dialogue and superb characterisation, Lemire’s story is also visually stunning thanks to the artwork of Humberto Ramos. In fact, X-Haven is some of the most enjoyable mutant fun I’ve stumbled upon in a long time and along with Dennis Hopeless’ All-New X-Men, is proof positive that there’s a whole load of gas left in the mutant tank and a multitude of tales that still need to be told.  Snikt! Snikt! Tim Cundle