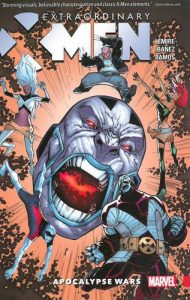 I never used to place much stock, or had any faith in epiphany until I read Brian Michael Bendis’ run on X-Men. Before he started the writing the book, I was always, at best ambivalent about the title. Oh sure, I’d read Chris Claremont and Joss Whedon’s output and I’d be lying if I said I didn’t enjoy their collected stories, but not enough to make a die-hard, avid fan who couldn’t miss an issue. To be honest, I always preferred Wolverine’s solo outings and thought that the rest of the team got in the way of him delivering slice and dice justice. However, that all changed when Bendis took the reins; he made a believer out of me and when he left, I thought I was going to be consigned to the wilderness again, left out  in the cold as far as Professor X’s students were concerned. Then Dennis Hopless and Jeff Lemire picked up the baton, and bam, just like that, I was back in the game as both writers and their artists took their respective and well earned places behind the wheel,  turned the nitrous on, dumped the trans-brake and the X-Men, once again, took off like a rocket.

When something hurtles along at the kind of speed that Jeff Lemire’s Extraordinary X-Men does you’ve either got to hold on tight or you’ll be left behind choking on the dust and debris it kicks up as it moves on down the road. Like Dennis Hopeless’ All-New X-Men, time and it’s seemingly immovable course play a major role in Lemire’s Extraordinary X-Men as the relationship between Magik and her protégée Sapna reaches a critical stage when the latter’s powers grow exponentially and student and teacher realise that the path they want to travel together is an impossible one, and the future of the world rests upon decisions that they are, separately, going to be forced into making. And when Colossus leads his new team into action, tragedy strikes, propelling them far into a hostile future that holds nothing but death and despair and leads to an old enemy using the X-Men’s own might against them.  Ending on a classic comic book cliff-hanger, Jeff Lemire’s Apocalypse Wars drops the reader straight into the thick of the action from the off and then via flashback allows it to progress at a natural, if incredibly rapid rate, as the main team and Illyana’s stories evolve and gradually coalesce. Filled with memorable and immediate characterisation and lively dialogue and built around Ramos and Ibanez striking art, it juxtaposes the personal arcs with the world changing and life ending scenarios that the mutants find themselves in to wonderful effect, ensuring that the reader forms a bond with, and comes to care about, each and every one of the hero’s, new and old alike, who are caught in the turbulence and ripples of the encroaching war. I never knew how good the X-Men were until now, and now I don’t want the books to end. Batten down the hatches and prepare for the Apocalypse… Tim Cundle