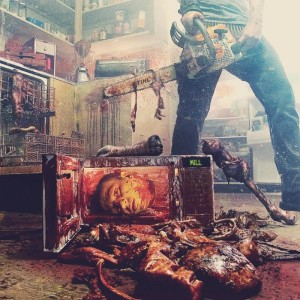 Rather than let the opus decompose into dust however, EXHUMED returned to the studio to revisit the underground classic, the results of which can be heard on Gore Metal: A Necrospective 1998 – 2015. Adding depth and a new level of devious urgency to the proceedings thanks in no small part to years of touring and a vastly improved-sounding recording quality, Gore Metal: A Necrospective 1998 – 2015 still maintains the grinding, bone raw aggression of the original recordings. Asserts Metal Rules in a 4/5 review, “This is not a re-imagining or re-interpretation. The songs are played with the same virulence and raw power of the original, and the studio polish, such as it is, is mostly there for the purpose of clarity. The band certainly do not seem to be aiming for slick, pristine sonic perfection. Plenty of warts remain, as they should. Still, tracks like ‘Necromaniac,’ ‘Limb From Limb’ and ‘Casket Crusher’ hack and slash as they were initially intended. The vocal back and forth from Harvey and [Ross] Sewage is as gnarly as ever, especially since EXHUMED have been moving away from the lyrical nastiness of ‘Vagitarian II’ and ‘Open The Abscess’ since re-animating in 2010. Only the drum performance here is markedly improved, with Mike Hamilton’s athletic precision revitalizing Col Jones’ spray-gun flailing of yore.” Adds Invisible Oranges, “Though only Matt Harvey remains from the old crew, he’s brought back an old friend to guest on these re-recordings. Ross Sewage reprises his primal roar here on… and the result is an especially nostalgic and endearing feel that most re-recordings miss in their quest for perfection. The performance is tighter, the guitar solo is sharper and the vokills are actually somewhat intelligible this time around.”

Witness the updated auditory severity of Gore Metal: A Necrospective 1998 – 2015, now rotting the airwaves of Vice Magazine at THIS LOCATION.

EXHUMED is currently spreading their disease throughout North America supporting co-headliners Napalm Death and Voivod. The invasion will slaughter nearly three-dozen municipalities upon its conclusion, with its final assault befalling Houston on February 28th. Additional support will be provided by Iron Reagan and Black Crown Initiate with Ringworm, Dayglo Abortions, Theories and Phobia to appear on select performances throughout the run.

Presented with completely new artwork and a gaggle of detailed liner notes, Gore Metal: A Necrospective 1998 – 2015 will be unleashed via Relapse Records February 10th, 2015 digitally, as a limited edition LP, and as a deluxe two-CD set which comes packaged with the original version of the album for the price of a single CD. Relish the gorific bargains! Preorder your copy today at THIS LOCATION. Desirers of the digitals can point their browsers HERE.